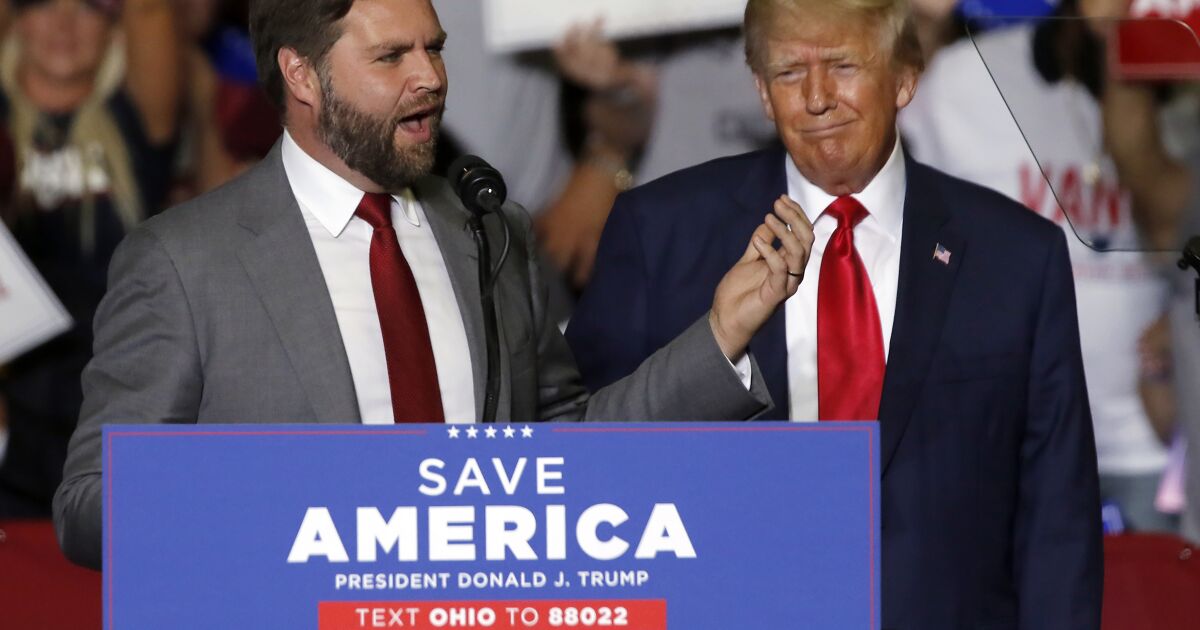 Judging by that record, you might think that J.D. Vance, the Republican venture capitalist and author Trump endorsed in the U.S. Senate race here, would be well ahead of Rep. Tim Ryan, his Democratic opponent.

But polls say the race is close. FiveThirtyEight, a polling aggregator, gives Ryan a 29% chance of pulling off the upset. Ryan leads in five of the last eight polls cited by FiveThirtyEight, but the margins are small and neither candidate has topped 50% in any of them, suggesting there is still a bloc of undecided voters.

“I don’t believe that it is that tight,” Vance told The Times at the Perry County Gun Bash this month.

The problem for Vance, and national Republicans, is that they really need to win this race to regain control of the Senate. The Senate is evenly divided, with Vice President Kamala Harris serving as the tiebreaking vote for the Democratic caucus.

In Ohio, the GOP is playing defense — the winner here will replace retiring Republican Sen. Rob Portman. Republicans are also defending seats in Wisconsin and Pennsylvania, two states Trump lost in 2020. And they’re also trying to pick up seats by defeating Democratic incumbents in bluer states such as Arizona, Georgia, Nevada and New Hampshire.

Losing a winnable race in a red state is something that Sen. Mitch McConnell (R-Ky.), who hopes to become majority leader again come January, can ill afford.

So why is the Ohio contest so close?

The state’s fluid politics, which can seem confusing to outsiders, offer one explanation. Although George W. Bush and Trump won the state twice, so did Barack Obama. Sherrod Brown, the gruff, labor-focused senator who’s also the only Democrat serving statewide, successfully defended his seat in 2018.

The two candidates’ backgrounds could also be contributing to making this a tight race.

Both Ryan and Vance are Ohio natives, both have tailored their messages to the white working class of Ohio, and both are from economically hard-hit cities that thriving manufacturing firms once called home.

Ryan grew up in Niles, a small industrial city in the northeast corner of the state where automobile makers once dominated. He got his start in politics in 1994 serving as a staffer for Rep. James Traficant. Less than a decade later, Ryan was elected to replace Traficant after his former boss was expelled from Congress over bribery and corruption charges.

Northeast Ohio has deep union ties and is an area that helped boost Brown past the finish line in multiple tight races. Ryan is trying to tap into that similar message by running a campaign almost entirely focused on economic issues.

Vance grew up in Middletown, a once-thriving steel mill town in southwest Ohio, where half-century-old painted advertisements still cling to a number of brick buildings making up the downtown area along Central Avenue. Fenced-off buildings are as common as boarded-up storefronts.

Vance famously wrote about his hometown and rough upbringing in his bestselling memoir, “Hillbilly Elegy.” Vance’s childhood featured a mother who struggled with drug addiction and a grandmother and grandfather who filled the role of parents for a young Vance.

After high school, Vance served in the public affairs branch of the Marine Corps before attending Ohio State University and eventually earning a juris doctor degree from Yale Law School. Vance’s career as a venture capitalist started in California, where he spent many years working under billionaire investor Peter Thiel.

Vance’s adult life largely took place outside Ohio, a fact that Ryan has repeatedly highlighted in campaign ads and a source of contention for some in his hometown.

“He left Ohio as soon as he could and only came back when it benefited him: for his book and now for his political career,” said Heather Gibson, the owner of the Triple Moon Coffee Co. in Middletown. “J.D. grew up in Middletown, but that was the extent of it; he left.”

Ryan has been able to narrow the race largely due to what some conservatives and others have called a lackluster campaign by Vance.

National and local Republicans have criticized Vance for his slow fundraising. Through the end of August, Vance had raised just $3.6 million, much less than the $21.7 million Ryan brought in through the end of June, according to the most recent Federal Election Commission data available. Vance’s campaign has had to be “a little bit more reserved” and a “little bit smarter about how we spend our money,” he said during a speech at a Republican fundraising event in Pickerington in September.

In August, McConnell’s Senate Leadership Fund committed $28 million to supporting Vance, a remarkably large investment in a race many Republicans had hoped their side would dominate.

“In a world in which the two candidates were both competent, you would expect the Republican to win fairly easily,” said David Niven, a professor of political science at the University of Cincinnati. “In a world in which Ryan is on point, and Vance has some self-inflicted wounds, you have the formula for a very competitive outcome.”

Vance has tried to counter Ryan’s economic message with cultural appeals by accusing Ryan of wanting to defund the police; blaming Democrats, China and border security failures for fentanyl overdoses; and railing against pornography and abortion.

“This campaign is big, and the national media is obsessed with it,” he said earlier this month. “You might be aware that they don’t always love me, they have some issues with me.”

At times, Vance and his staff have been more directly combative with the media. When asking if he prefers Skyline Chili or Gold Star Chili — two Cincinnati staples — a Times reporter was chastised by Vance’s press secretary for not asking her for permission to ask the candidate a question.

“If politics is about economics, Democrats can win Ohio,” he argued. “They have a message and policies that fit industrial Ohio, that fit rural Ohio. But if politics is a series of cultural questions, then they get overwhelmed anywhere that isn’t a city.”

Ryan has tried to avoid losing ground on cultural questions by running an economic-focused campaign. He believes that neither party has a great reputation in Ohio and that the country needs to “move into a whole new era of politics.”

“There’s a lot of people that are without a [political] home,” Ryan told The Times. “There may have been Democrats who went for Trump, and Republicans who went for Trump but don’t want to go and support an insurrection, and they’re kind of looking for a home. So that’s why [I’m] saying, ‘Let’s get back to the basics for Americans first,’ then we’ll sort out all the other political nonsense.”

The day before the event, however, Ryan insinuated that Biden shouldn’t seek reelection and reiterated his desire for new leadership for both parties.

Ryan has made distancing himself from Biden and the Democratic Party a key component of his campaign. Ryan has repeatedly criticized Biden’s decision to cancel some student debt, a plan he once supported.

“There are a lot of Republicans who are completely alarmed by the first president in American history not to accept the election results after appropriate court reviews,” said John Bridgeland, a former staffer for Portman when he served in the House. Bridgeland helped form Republicans for Tim Ryan, a fundraising and advertising drive that will feature video testimony from Ohio Republicans who are backing Ryan for Senate.

Bridgeland has known both candidates for years and called Ryan a “decent, honest, values-driven person” who previously worked with Bridgeland on combating high school dropout rates across the country.

Bridgeland also once considered Vance “another bright light” in the future of politics, but his opinion of him has soured as Vance catered more and more to Trump.

“When he went to seek the Republican nomination, he was perpetuating the myth that the [2020] election was somehow rigged,” Bridgeland said. “There are all these candidates that Trump has endorsed that are doing the same thing. It’s completely unacceptable, and people have to stand up and defend our democracy.”

Ryan is not able to avoid cultural and social issues entirely.

Gibson, the Middletown coffee shop owner, has voted for politicians in both major parties, but wants to support a candidate who will stand up for LGBTQ rights, human rights and democracy, she said.

“This is what I say to all politicians: I’m a hardworking person, I’m a business owner, I live my life in private,” Gibson said. “I don’t need the government to necessarily help me, but do not hurt me; stay out of my life. Abortion is a huge issue, and it will be a huge issue for the reason I vote, and who I vote for.”

Ohio has experienced a surge in voter registration after the Supreme Court decision overturning Roe vs. Wade, with more than 90,000 people registering since the June ruling. The court’s shift on abortion coincided with an increase in the percentage of newly registered voters who are women, according to a New York Times analysis of 10 states that had data available.

“I believe that for everybody it should be their own choice,” Kathy Smedley said at the Morgan County Fair. “It’s between them, God, their preacher and their family. I think when they overturned Roe vs. Wade, that’s going to be the biggest negative thing for the Republican Party that ever happened.”

Trump’s endorsement and the “R” next to his name may prove enough to deliver Vance a victory come November.

“He thinks the ‘R’ is going to pull him over the line, and he’s probably right,” Bill Cunningham, one of Ohio’s most well-known conservative talk-radio commentators, told CNN.

In interviews across the state, many Ohio Republican voters don’t know much about Vance and are supporting him because of Trump’s endorsement and because of his affiliation with the Republican Party.

“If he backs Trump, that’s the No. 1 thing,” said Kenny Miller, 66. Miller said he wants a candidate who will do something for the working people of Ohio. Although he is a gun owner with a concealed-carry license, Miller also supports stricter gun legislation. “You have to have more background checks for the mentally unstable,” he said.

Vance also has support in his hometown — although not necessarily by virtue of being from there.

“I don’t know [Vance] that well,” said Benjamin Hubbard, 65, of Middletown. “I know Trump supported him, so he must be pretty good.”