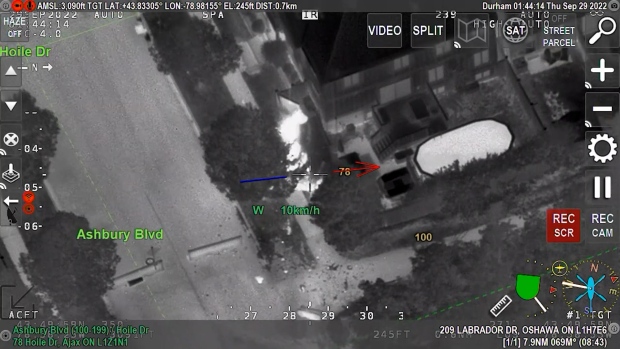 A 24-year-old man is in custody after a high-speed chase in Ajax, which only came to an end after the suspect crashed his vehicle into a cement barrier and rolled it onto a residential property.

Durham Regional Police captured shocking video of the crash from a helicopter.

Police say that at around 1:45 a.m. on Thursday, they received information from the Cobourg Police Service that a suspect operating a Porsche SUV fled from a traffic stop in the Town of Cobourg.

The suspect reportedly almost hit the investigating officer as he fled the scene.

The suspect vehicle was later located in Oshawa, where it failed to stop for police, before fleeing at a high rate of speed, police say.

Police were able to locate the suspect with their Air1 helicopter and followed him into Ajax, where he crashed the vehicle at the corner of Range Road and Hoile Drive.

Isaac Stafford, of Ajax has been charged with 12 offences including two counts of dangerous operation and unlawful possession of a schedule I substance (Oxycodone).

He is being held for a bail hearing.