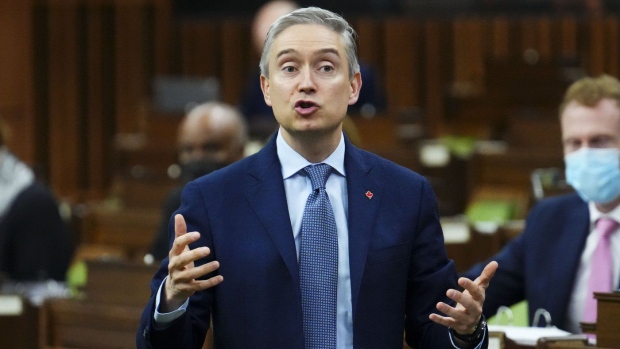 In a statement, the U.S. says it supports efforts around the world to ensure consumers and customers can trust their wireless networks and providers.

It says it will continue to collaborate with Canada and other allies to ensure shared security in the 5G era.

The U.S. first began restricting domestic firms from doing business with Huawei back in 2019, and has been waiting for Canada to follow suit ever since.

During his confirmation hearing in September, U.S. ambassador to Canada David Cohen suggested Washington was growing impatient with the delay.

“We welcome Canada’s decision,” the State Department said in writing Friday in response to a query from The Canadian Press.

“The United States supports efforts to ensure countries, companies, and citizens can trust their wireless networks and their operators. We continue to collaborate with allies like Canada to ensure our shared security in a 5G future and beyond.”

That anodyne comment stands in contrast to what Cohen told the Senate Foreign Relations Committee last year before he was confirmed as President Joe Biden’s envoy to Canada.

“We are all waiting for Canada to release its framework for its overall China policy,” Cohen said, describing the autocratic regime’s ambitions as an “existential threat” to the U.S.

He also promised to take part in discussions to “make sure that Canada’s policies reflect its words in terms of the treatment of China.”

At the time, Canada was walking a tightrope with China, having arrested Huawei executive Meng Wanzhou on a U.S. extradition warrant while working to free two Canadian citizens detained in retaliation by the regime.

Just days later, however, Wanzhou was released after the U.S. Department of Justice announced a deferred prosecution agreement in her case. The two Canadians, Michael Kovrig and Michael Spavor, were freed by China hours later.

Huawei Canada has reacted to Ottawa’s move, saying that it is “an unfortunate political decision that has nothing to do with cybersecurity or any of the technologies in question.”

Huawei Canada added that the ban on its equipment and services could lead to “significant economic loss in Canada and drive up the cost of communications for Canadian consumers.”

In an interview Thursday, Huawei Canada vice-president Alykhan Velshi said that it would be “reckless and irresponsible” for the Canadian government to ask the company to stop supporting its existing equipment in the 5G network, noting that there are around 10,000 cellphone sites across Canada that have Huawei technology in them.

He also said that more conversations need to be had between Huawei and Ottawa.

ZTE also provided its thoughts on the decision in a statement saying that the company “reject(s) the premise of this announcement,” calling it “highly speculative.”

In addition to the 5G network ban, the Canadian government has also said that any use of new 4G equipment and managed services from Huawei and ZTE will also be prohibited, with existing gear to be pulled out by Dec. 31, 2027.

Minister Champagne said Thursday that the government will not reimburse telcos that need to remove the equipment from their networks.

Earlier this week, Ottawa also announced the end of another irritant that was believed to be a symptom of the Huawei tensions: a three-year Chinese ban on imports of Canadian canola.

In March 2019, a few months after Wanzhou’s arrest, China blocked canola from two Canadian companies, ostensibly after pests were detected in shipments from Canada.

This report by The Canadian Press was first published May 20, 2022.