Pick-up trucks, tractors and a large group of protesters are in downtown Toronto for an anti-mandate demonstration Saturday.

Earlier this week, there were reports that the “Freedom Convoy” was planning a demonstration in downtown Toronto this weekend, prompting police and city officials to prepare for similar disruptions brought on from the ongoing protest in Ottawa.

The planned protest started at noon at Queen’s Park, with protesters carrying signs and chanting against COVID-19 mandates, including proof of vaccination in certain indoor settings.

Toronto police said the service is prepared for what is expected to be a massive demonstration.

“We have a plan in place, we have significant road closures here. We will not be allowing access anywhere near the Queen’s Park area, and we have a number of ,and that’s for people to protest safely, for the people in the area to not be disrupted too much,” Staff Supt. Lauren Pogue told CP24.

“We we will not tolerate any violence, any promotion of hatred, speech whether that be with placards or flags as well,” she added.

On Friday, some vehicles and tractors arrived in front of the Royal Ontario Museum on Avenue Road, just north of Queen’s Park. 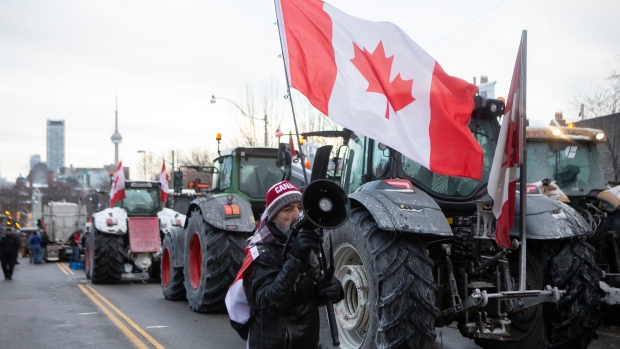 In anticipation of the large protest, on Friday police started to close roads in the downtown core and have advised residents to expect a large police presence in the area this weekend.

“The service is required to facilitate peaceful demonstrations,” Police Chief James Ramer told reporters at a briefing Friday. “This will be balanced by our priority to ensure public safety to protect hospitals and infrastructure and the city’s emergency response needs.”

Ramer said that large vehicles will not be allowed to congregate around Queen’s Park and that the demonstrators will be encouraged to go to staging areas and then travel to Queen’s Park by foot if they want to protest there.

He added that anyone who tries to block access to nearby hospitals will be “subject to strict enforcement.”

A portion of University Avenue has been closed off in order to protect Hospital Row, police said. The closure will be in place all weekend but hospital staff, workers, patients and people collecting patients will have access.

Some people were advised on Thursday to avoid wearing any scrubs or clothing identifying them as health-care workers when they come into work this weekend to avoid being blocked or harassed.

Women’s College Hospital rescheduled some appointments and closed its COVID-19 assessment Centre early on Friday and altogether over the weekend “out of an abundance of caution.”

In response to the demonstration, a group of health-care workers is planning a counter protest downtown to ensure protesters do not interfere with anyone trying to receive health-care services.

“The goal is to let Torontonians know that we want to ensure that they will have unfettered access to hospitals in downtown, to community-based clinics in downtown, and to let our colleagues who are working in the hospitals today know that they should feel safe and secure walking the streets dressed however they want to, in their white coats,” Dr. Philip Berger, organizer of the Access to Care rally, told CP24. 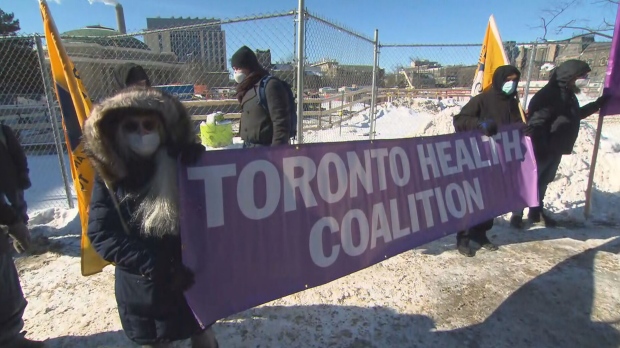 Mayor John Tory urged anyone who does not plan to protest peacefully to “stay home.”

“If anyone is planning to come here for a protest that is not peaceful, and that is not respectful, I would urge you on behalf of all Toronto residents and businesses to please stay home. Peaceful and respectful is the way we do things here,” Tory said at a city press briefing on Friday.

Last weekend, thousands of protesters and truckers, many of whom drove from the west coast, gathered in the nation’s capital to rally against COVID-19 mandates.

The demonstration, which some have described as an “occupation,” is now in its ninth day, resulting in ongoing traffic gridlock and honking vehicles.

Ottawa police reported significant disruptions due to the convoy, including vandalism, harassment, expressions of hate and violence and ongoing obstruction of many services.

Local protests have also broke out in southern Alberta, Quebec City and Winnipeg.

-With files from CP24’s Joshua Freeman