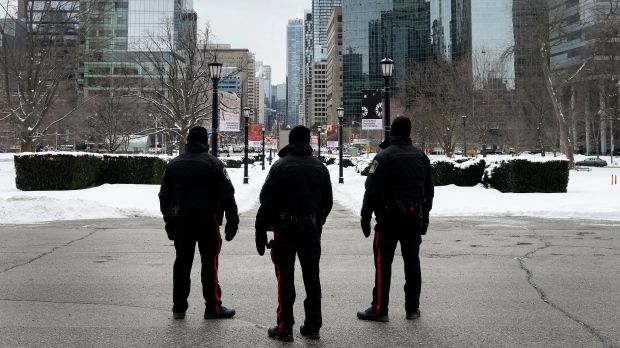 Toronto’s police chief says the public should expect to see a large police presence in the downtown core this weekend as a convoy protest against vaccine mandates rolls into town.

“The service is required to facilitate peaceful demonstrations,” Ramer told reporters at a briefing Friday.  “This will be balanced by our priority to ensure public safety to protect hospitals and infrastructure and the city’s emergency response needs.”

Police would not say exactly how many officers or what type of units will be deployed downtown or in other areas to keep the peace, but Ramer said the force will remain “nimble.”

“I can’t speak to specific strategies, nor will I frankly. It’s just simply to know that we are examining a number of contingencies and we will adapt to address what we’re presented with,” Ramer said. “We will try our very best to address public safety and to reduce or have minimal disruption to the entire city.”

He did say that large vehicles will not be allowed to congregate around Queen’s Park this weekend and that the demonstrators will be encouraged to go to staging areas and then travel to Queen’s Park by foot if they wish to protest there.

He also said police do not intend for protesters to “encamp or stay permanently for any duration of time” at the protest sites.

And anyone who tries to block access to hospitals, Ramer said, will be “subject to strict enforcement.”

Earlier Friday, Toronto police closed off a stretch of University Avenue in order to protect Hospital Row ahead of the expected demonstrations.

“These closures could remain in place all weekend,” police said in a tweet. “We will continue to assess the situation and make any adjustments where needed. We will continue to update the public. Please avoid demo areas, where possible, as it is likely to cause delays.”

The preparations come with a convoy protest, possibly similar to that seen in Ottawa over the past few days, expected to take place in downtown Toronto starting tomorrow.

The protests are expected to land at Queen’s Park, just north of the Hospital Row area, which is home to some of the country’s busiest hospitals.

On Thursday some health-care workers were told to avoid wearing any clothing identifying them as such when they come in to work on the weekend so as to avoid being blocked or harassed.

Women’s College Hospital also said that it would be rescheduling some appointments and closing its COVID-19 assessment Centre early on Friday and altogether over the weekend “out of an abundance of caution.”

Ottawa has seen a week of severe disruptions as members of an anti-vaccine mandate convoy moved in on the city and refused to leave.

A recently passed federal law makes it illegal to harass health-care workers or patients or to obstruct access to health-care facilities.

Parking enforcement officers were also seen Friday posting “no parking” emergency notices in some areas where vehicles are normally allowed to park and large police buses were seen parked around the legislature.

Staff Superintendent Lauren Pogue told reporters that road closures, parking restrictions, CCTV cameras, and body-worn cameras will be part of the police response this weekend. Police have also been in touch with protest organizers.

“We will be prioritizing emergency access routes to hospitals and anyone who attempts to disrupt hospital access and routes of emergency operations including ambulance, fire or police will be subject to enforcement,” Pogue said. “We are prepared to monitor events across the city 24/7 and deploy additional resources if necessary.”

Speaking alongside Ramer Friday, Tory said he supports the work of the police and advised anyone who doesn’t plan to demonstrate peacefully to “stay home.”

“Police, with the full assistance of the city, have been preparing for this protest as you’ve heard this afternoon, because we all want to do everything we can to avoid the situation that we’re seeing in Ottawa,” Tory said.

“If anyone is planning to come here for a protest that is not peaceful, and that is not respectful, I would urge you on behalf of all Toronto residents and businesses to please stay home. Peaceful and respectful is the way we do things here.”

Tory said he has spoken with Prime Minister Justin Trudeau, Premier Doug Ford and Public Safety Minister Marco Mendicino, who have offered their support if needed.

In a statement, Ford said that “harassment or acts of hatred or intolerance of any kind will not be tolerated.”

The convoy participants are expected to gather at malls around the GTA Saturday morning before converging on Queen’s Park around noon.

Coun. Mike Layton, who represents the area of Queen’s Park and Hospital Row, said people in the area are used to loud protests, but the behaviour seen in Ottawa has been concerning.

“Our neighbourhood is no stranger to protests of this sort,” Layton said. “We’ve seen the harassment of both businesses and individuals almost weekly for over a year, but we’ve seen it escalate in Ottawa. And that’s a real concern of the residents of the ward.”

He said he’s received multiple calls from residents who are concerned and added that “there’s a line” between the fundamental right to protest and harassment.

“The hateful images and symbols that we’ve seen, they cannot be tolerated,” Layton said.

Coun. Kristyn Wong-Tam, who represents part of the area closed off for the protests, told CP24 that she has been in contact with Toronto police about their plans and that all possible resources to keep residents safe “will be deployed.”

She said people’s right to protest lawfully and peacefully will be preserved, but the rights of businesses and residents will also be protected.

“We also have rights for downtown businesses and business owners to make sure that they can carry about their business and do it safely,” she said.

Wong-Tam said she has been assured that the response to the protests will be “proactive” and “fast-acting” where necessary.

Asked about possible disruptions at residential buildings in the area, similar to those seen in Ottawa, Ramer said police are planning for this weekend’s protest based on some of what has been observed in that city.

“We are very aware of some of the activities that have taken place in Ottawa as you’ve referenced and we’ve very much taken those things into consideration and are forming part of our strategy,” he said. “And so what I will say is that we are going to try to do our best to prevent that type of action and to ensure there’s minimal disruption. That is our goal.”