A new waterfront public art trail is coming to Toronto thanks to a $25 million donation – the largest arts-related gift the city has ever received.

The Pierre Lassonde Family Foundation offered the donation for the trail, which will be located in parks at Villiers Island in Toronto’s Port Lands.

“This addition is something that is just going to make an extraordinary additional contribution to that accessibility, to the appeal of the waterfront, to people who live, work and play here, and a lot of people who just visit here,” Mayor John Tory said at a news conference at Sugar Beach Tuesday morning.

Waterfront Toronto is building the parks where the public art trail will run, as part of the Port Lands Flood Protection Project.

The Lassonde family’s donation includes $10 million to commission two landmark permanent art works and up to $15 million to create a new non-profit organization that will manage the art trail.

“Having lived in Toronto for a good portion of his life my father wanted to give something back to the city that would complement the many outstanding arts organizations already here,” Julie Lassonde, daughter of Pierre Lassonde, said.

“As an avid traveler and a visitor of many famous public art parks during those travels, an idea germinated within him about creating an outdoor art trail that was free and accessible to the public.” 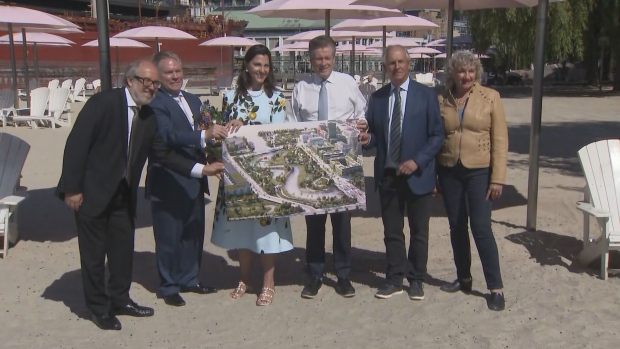 The trail will be a free, open-air route and will feature two permanent pieces – one by a leading Canadian artist and another by an international artist.

A rotating cycle of contemporary installations from local, national and international artists will also be featured at the trail.

“The thousands (of people) that will be there will come around the corner and find some magic, the magic that is public art. And to be able to sit in a beautiful setting outdoors with the birds, with the geese going by, and bring in and drink in what will be, I believe, exceptional, exceptional public art permanent pieces,” Ward 14 Councillor Paula Fletcher said.

Tory said the trail will not only enhance the Waterfront, but it will also signify the city’s commitment to supporting local artists.

“This extraordinary donation of $25 million to create this art trail is going to be something that will, again, put us on the map in terms of that commitment to creativity, to artists, to artistry, and to the public realm,” he said.

Today, we announced a generous $25 million dollar donation from The Pierre Lassonde Family Foundation to our city’s waterfront to create a new waterfront public art trail – serving as a free, accessible outdoor museum for visitors and residents alike.https://t.co/KR3l7JsHEc pic.twitter.com/j85uYW6x37