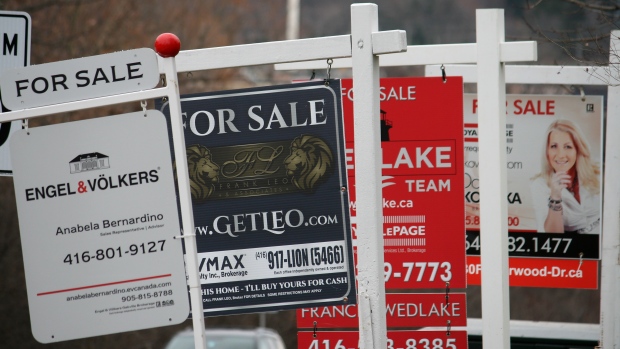 The average selling price of a Toronto home decreased slightly in March, bucking a trend which usually sees the market heat up as spring approaches.

The Toronto Regional Real Estate Board says that the average selling price across all property types last month was $1.299 million.

That marks a slight decline from February when the average property changed hands for a record $1.334 million.

Prices, however, were still up a staggering 18.5 per cent from March, 2021 when the average selling price was under $1.1 million.

The latest data, released by the board this morning, comes on the heels of the Bank of Canada hiking interest rates by 25 basis points last month.

The central bank has also warned that additional rate hikes are likely as it seeks to bring inflation down from a 30-year high of 5.7 per cent.

That, in turn, will push the cost of borrowing up and could eventually impact the broader real estate market.

“Competition between home buyers in the GTA remains very strong in most neighbourhoods and market segments. However, we did experience more balance in the first quarter of 2022 compared to last year. If this trend continues, it is possible that the pace of price growth could moderate as we move through the year,” TRREB Chief Market Analyst Jason Mercer said in a news release accompanying the figures.

Home prices across the GTA have been rising steeply throughout the pandemic, due in part to near-zero interest rates and a desire among many for more space during the work-from-home era.

But the latest data would seem to suggest that a shift could be underway.

The approximately 11,000 sales that took place in the month still represents the third busiest March ever but it is a  30 per cent decline when compared to March, 2021.

Listings were also down but only by approximately 12 per cent, which could point to a more balanced market.

That said for now affordability continues to deteriorate despite the pullback in demand.

This was particularly true when it came to some of the more affordable dwelling types, including semi-detached homes (prices up 26 per cent year-over-year) and townhouses (25 per cent).

Price acceleration was also particularly pronounced in the 905 region around Toronto where the average selling price across all dwelling types was up nearly 27 per cent year-over-year to $1.346 million.

In the release, TREBB CEO John DiMichele said that the latest numbers should be a reminder of the importance of policies aimed at boosting housing supply, rather than “trying to suppress demand.”

His comments come in the wake of the Ford government hiking the tax on non-resident buyers as part of a wider plan to address the housing crisis.

“Population growth is expected to be at or near record levels in the coming years. Demand for ownership and rental housing is not going away,” DiMichele warned.