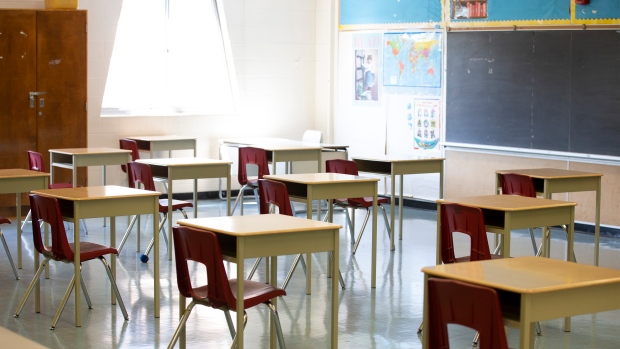 Toronto Catholic elementary teachers will not be taking part in parent-teacher interviews next week as they continue to negotiate a contract.

“Over the past two weeks TECT has met numerous times with the TCDSB to achieve a Collective Agreement.

At this point in time, Toronto Elementary Catholic Teachers are still without a contract, and our work-to-rule job action continues,” TECT President Julie Altomare-DiNunzio said in a statement.

“We do not take this action lightly and all Toronto elementary Catholic teachers will continue to communicate with parents to discuss student achievement, as per their regular classroom practice.”

The parent-teacher interviews are scheduled for Feb. 15 to 18.

It is the union’s latest move in its ongoing work-to-rule campaign as they try to reach an agreement with the Toronto Catholic District School Board.

The TECT, which represents more than 4,000 elementary teachers, has been without a contract since Sept. 2019. Talks between the union and the Toronto Catholic District School Board (TCDSB) began in Feb. 2021 but broke down months later, which prompted the start of the work-to-rule campaign.

The union accused the school board of using “the cover of the pandemic to make unreasonable, regressive demands at the bargaining table,” while the TCDSB claimed that the dispute is about TECT’s intention to prevent it “from providing absenteeism support and managing staffing processes.”

Late last month, the union submitted a formal notice to the TCDSB, informing the board about its plan to strike at some schools as negotiations continued to drag on.

However a few days later, the union said it was suspending its plans, citing “constructive dialogue” with the school board.

– with files from Chris Fox