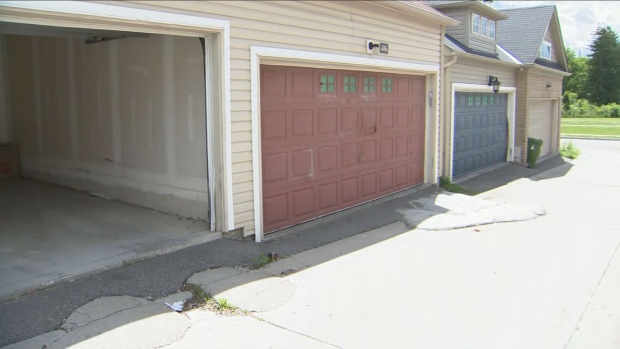 Speaking with CP24 Thursday, one of the York students said he discovered the hateful message on a garage while out on a daily walk Wednesday.

“I was just very caught off guard. I go quite often around these parts, same walk almost every day,” York student Robert Leitner said. “It just kind of was there that one time and really took me aback. It’s not something you normally see at this part near campus.”

The graffiti contained an antisemitic caricature and encouraged people to “shoot a Jew in the head.”

Leitner, who described himself as not being “super religious,” said the message nonetheless “just kind of all hits you.”

“This is what these people boil us down to. Just some graffiti, a very hateful message on a wall threatening our lives.”

He said he was taken aback, but not shocked, as he’s encountered antisemitism “directly to my face” not far from campus before.

He reached out to a friend and they sent an image of the graffiti to B’nai Brith Canada, which tracks antisemitic incidents. The organization then informed the university, which reached out to Toronto police to report the incident.

“Many students live in this area close to the Keele Campus. York University denounces this hateful, antisemitic act and reported it to @TPSOperations Hate Crimes Division,” the university said in a statement. “The University condemns this antisemitic act and will continue to support the TPS in any way possible. Supports are available to community members, and direct outreach is underway to Jewish student groups.”

Leitner’s friend Garrett Ryan is a grad student at York and said he too was taken aback, but not shocked.

“It’s not a surprising thing in this area, but it makes me feel a little bit nervous, a little bit sad, a lot angry as well,” Ryan said.

He said that he and his fiancee go for walks late at night in the area all the time and are identifiable as observant Jews.

“It’s frightening that people are trying to incite violence on us,” he said.

He said that while this incident is a blatant example of anti-Jewish hatred, there are more subtle messages posted around campus all the time “sending the same message that the Jewish population here is meant to feel less than welcome.”

In its most recent review of hate crimes in the city, Toronto police found that Jews continue to top the list as the most targeted group.

TPS confirmed to CP24 that they were contacted about the graffiti.

Both Leitner and Ryan agreed that there needs to be more of a conversation to curb the problem.

“I think it really just comes down to understanding that we’re all people,” Leitner said.  “We’re all different. We’re all made differently. I think conversations need to happen — very long and hurtful and insightful conversations. But we just need to be able to talk and understand and get along for lack of better words.”