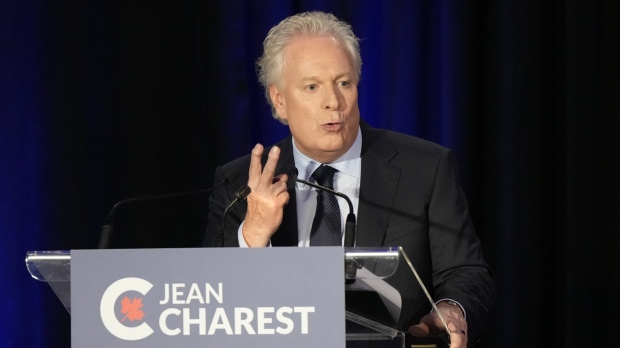 No audience, no podiums and appearances from only three out of the five candidates running to lead the federal Conservatives.

These are the circumstances under which the party’s last official debate of the race will take place tonight in Ottawa, before a winner is announced Sept. 10.

Those participating will be ex-Quebec premier Jean Charest, rural Ontario MP Scott Aitchison and Roman Baber, a former provincial legislator who Doug Ford booted from caucus over his opposition to COVID-19 lockdowns.

Rather than standing at individual podiums, the three will be placed around a table for the event, which is being billed as part debate, part roundtable.

Moderated by the party’s president, the event will be split into two 45-minute rounds. Candidates will answer questions in English during the first section and then switch to French for the second half.

While Charest applauded the party’s decision to make the event bilingual, doing so no doubt poses a challenge to Aitchison and Baber, who are not fluent French speakers.

The party’s decision to organize a third debate after two official ones were held in May drew sharp criticism from some in the party, including the two candidates who have decided not to show: Pierre Poilievre and Leslyn Lewis.

Poilievre’s campaign issued a sharply worded statement after the party made the call.

It said the longtime MP and perceived front-runner of the race was going to stay focused on getting members to fill out their ballots, and slammed the earlier official English debate as an “embarrassment” for asking candidates personal questions about their favourite streaming shows and music.

Lewis’s campaign informed the party last week she wouldn’t attend, saying despite trying to find out more details it lacked details around format or questions.

Lewis, a rookie MP who is still learning French, pressed the party in an open letter on whether the event would address issues like the World Economic Forum, calling an inquiry into the federal pandemic response and abortion — topics, she said, she was hearing about from party members.

Under party rules, Poilievre and Lewis now risk being levied a $50,000 fine for skipping out on an official debate. The money would be taken from a $100,000 compliance deposit candidates submitted to enter the race.

Instead of participating in tonight’s debate, Lewis plans to spend the evening campaigning on Prince Edward Island, while Poilievre is in Saskatchewan.

The party says the debate is the last chance members have to see candidates deliver their pitches before submitting their ballots.

Thousands of mail-in ballots are already being returned, which the party is processing.

While Poilievre criticized the third debate as a distraction from his efforts to get out the vote, Charest’s team views it as an important opportunity to persuade members to pick him as their first choice.

Last week, the party released the final tally of how many members can vote in the contest, saying a record-breaking 679,000 will be able to fill out a ballot.

That’s more than double the number of members the party boasted when former leader Erin O’Toole was elected in 2020.

One of the provinces to see the biggest growth in membership sales was Quebec, a key battleground for both Charest and Poilievre.

Recently released fundraising figures show Poilievre raked in more than $4 million during the second quarter of this year, compared to Charest who raised almost $1.4 million.

This report by The Canadian Press was first published Aug. 3, 2022.