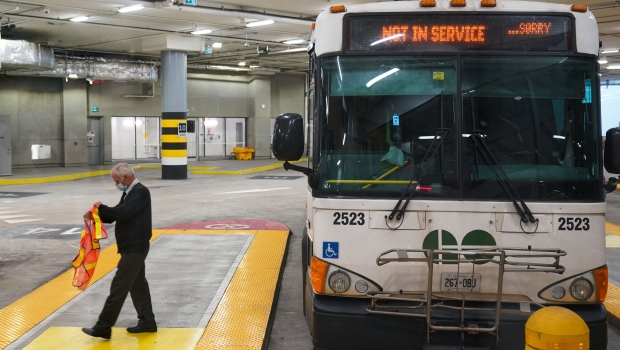 A group of striking railroad workers who have disrupted GO bus access to the terminal at Union Station for the last week are being urged by their employer to either return to the negotiating table or agree to binding arbitration.

Approximately 95 employees, who are all members of the International Brotherhood of Electrical Workers (IBEW), have been picketing outside Union Station for most of the week.

During that time they have regularly blocked the roadway used by GO buses to access the terminal, forcing Metrolinx to divert many buses to other stations. While some buses are continuing to depart from downtown, riders on those routes are being instructed to board at Bay Street and Lakeshore Boulevard rather than at the terminal.

“The disruptions targeting bus commuters are unacceptable and must stop immediately,” Toronto Terminals Railway, which employs the workers, said in a statement provided to CP24 on Friday afternoon. “TTR calls on the IBEW to return to the negotiation table or agree to binding arbitration.”

The striking workers are mostly responsible for signals and communication maintenance as well as train control along the Union Station rail corridor.

Toronto Terminals Railway has said that the dispute with the workers mostly revolves around a demand for increased wages.

For its part the union has said that TTR has “refused to negotiate seriously” and has so far not agreed to make any meaningful changes to a tentative agreement that was voted down by members in October.

For a full list of service interruptions as a result of the picketing taking place at Union Station follow this link.