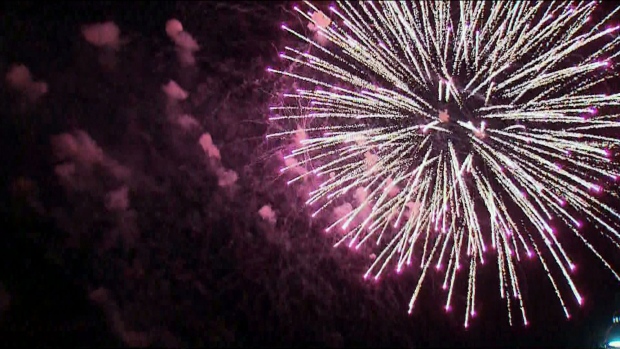 Several fireworks displays will be taking place across the GTA for those hoping to ring in Canada’s 155th birthday with a bang.

In Toronto, the city’s always-popular Canada Day fireworks display will be back at Ashbridges Bay Park, near Woodbine Avenue and Lake Shore Boulevard, starting at 10 p.m. Friday.

Fireworks will also be set off at North York’s Downsview Park, near Keele Street and Sheppard Avenue West, on Friday at 10 p.m.

Also in North York, the skies over Mel Lastman Square, 5100 Yonge St., north of Sheppard Avenue, will be lit up starting at 10 p.m.

East enders can take in a pyrotechnics display for Canada’s birthday at East York’s Stan Wadlow Park, 373 Cedarvale Ave., near Woodbine Avenue and O’Connor Drive, while those in Scarborough should make their way to Milliken Park, 5555 Steeles Ave. E., between McCowan and Middlefield roads. A display will also be held at Splendid China Mall, 4675 Steeles Ave E., east of Kennedy Road. All three shows will get underway at 10 p.m.

Over in York Region, Canada’s Wonderland is hosting a day-long Canada Day party that will culminate with a fireworks show at 10 p.m.

Fireworks shows will also be held in Aurora at Lambert Willson Park, 115/135 Industrial Pkwy. N.; in King City at Kettleby Park, near Jane and Highway 16; in Markham at Markham Centre, near Birchmount Road and Enterprise Boulevard; in Newmarket at George Richardson Park, near Main Street North and Green Line East; in Richmond Hill at Richmond Green Park, 1300 Elgin Mills Road East; and in Whitchurch-Stouffville at Stouffville Memorial Park at 2 Park Dr. All events will get underway around 10 p.m.

There will also be displays in Brampton at Chinguacousy Park, 9050 Bramalea Rd.; in Malton at Westwood Square, 7205 Goreway Dr.; and in Caledon at Albion Hills Conservation Area, 16500 Hwy. 50.

Durham will host fireworks displays in Ajax at Ajax Downs, 50 Alexander’s Crossing; in

Most fireworks displays will get underway around 10 p.m.