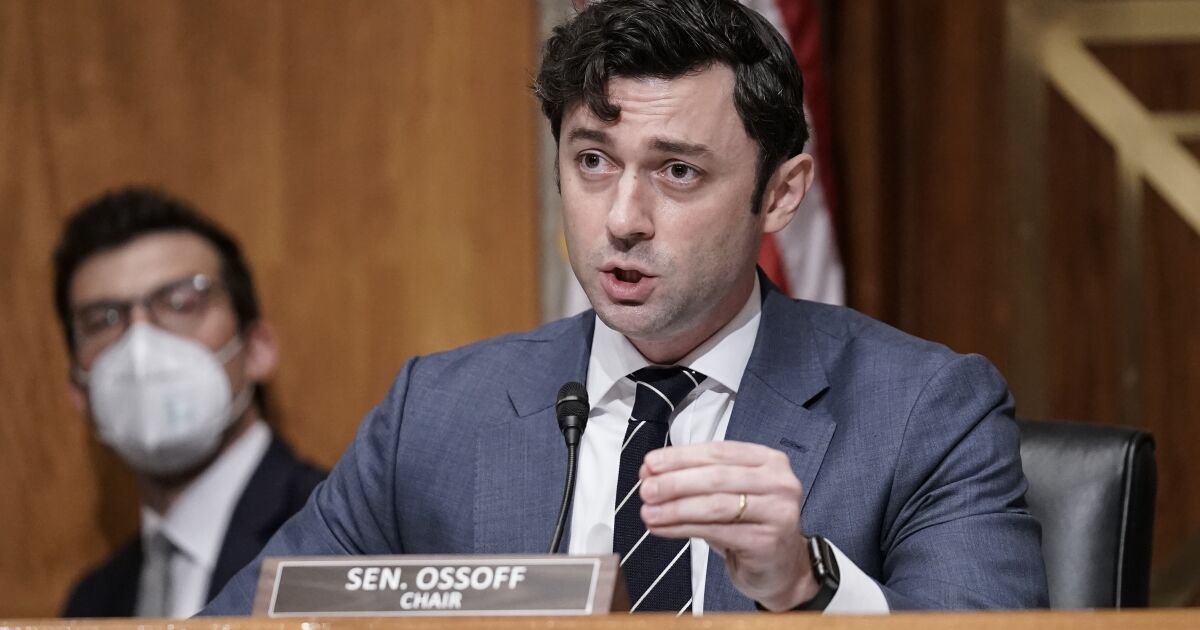 A bipartisan group of U.S. senators introduced legislation Wednesday to overhaul oversight and bring greater transparency to the crisis-plagued Federal Bureau of Prisons following reporting from the Associated Press that exposed systemic corruption in the federal prison system and increased congressional scrutiny.

The proposed Federal Prison Oversight Act would require the Justice Department to create a prisons ombudsman to field complaints about prison conditions, and would compel the department’s inspector general to evaluate risks and abuses at all 122 federal prison facilities.

The bill, sponsored by Sens. Jon Ossoff (D-Ga.), Mike Braun (R-Ind.) and Dick Durbin (D-Ill.) is being introduced a day before Bureau of Prisons Director Colette Peters is scheduled to testify before the Senate Judiciary Committee, which Durbin chairs.

Ossoff, Braun and Durbin are three founding members of the Senate Bipartisan Prison Policy Working Group. The panel launched in February amid turmoil at the Bureau of Prisons, much of it uncovered by AP reporting, including rampant sexual abuse and other criminal misconduct by staff, chronic understaffing, escapes and deaths.

“It’s no secret that BOP has been plagued by misconduct,” Durbin said. “One investigation after another has revealed a culture of abuse, mismanagement, corruption, torture and death that reaches to the highest levels. And yet it still operates without any meaningful independent oversight. The result has been catastrophic for both incarcerated people and staff.”

A companion bill in the House is sponsored by Reps. Kelly Armstrong (R-N.D.) and Lucy McBath (D-Ga.).

The bill would require the Justice Department’s inspector general to conduct risk-based inspections of all federal prison facilities, provide recommendations to address deficiencies and assign each facility a risk score. Higher-risk facilities would then receive more frequent inspections.

The inspector general would also be required to report findings and recommendations to Congress and the public, and the Bureau of Prisons would then need to respond with a corrective action plan within 60 days.

A prison ombudsman would be established to take complaints — via a secure hotline and online form — and investigate and report to the attorney general and Congress dangerous conditions affecting the health, safety, welfare and rights of inmates and staff.

The reforms have the backing of a wide array of groups involved in the federal prison system and across the political spectrum, including the correctional officers union, the inmate advocacy group Families Against Mandatory Minimums, the American Conservative Union and the Koch brothers-backed Americans for Prosperity.

“Families with incarcerated loved ones for years have been calling for greater transparency, safety and accountable from our federal prisons,” FAMM President Kevin Ring said. “The bipartisan bill introduced today answers their calls.”

Shane Fausey, president of the Council of Prison Locals union, is also scheduled to testify Thursday, along with the former head of Pennsylvania’s state prison system, John Wetzel, and Cecilia Cardenas, a former federal inmate.

Ossoff has been leading an investigation of the Bureau of Prisons as chair of the Senate Homeland Security panel’s subcommittee on investigations. Recent hearings have spotlighted misconduct and abuse at a federal penitentiary in Atlanta and the Justice Department’s failure to properly account for in-custody deaths.

In July, Ossoff and the panel’s top Republican, Wisconsin Sen. Ron Johnson, grilled then-Bureau of Prisons Director Michael Carvajal as he refused to accept responsibility for a culture of corruption and misconduct that has plagued his agency for years.

“My 10-month bipartisan investigation of corruption, abuse, and misconduct in the Federal prison system revealed an urgent need to overhaul federal prison oversight. I am bringing Democrats and Republicans together to crack down on corruption, strengthen public safety and protect civil rights,” Ossoff said.