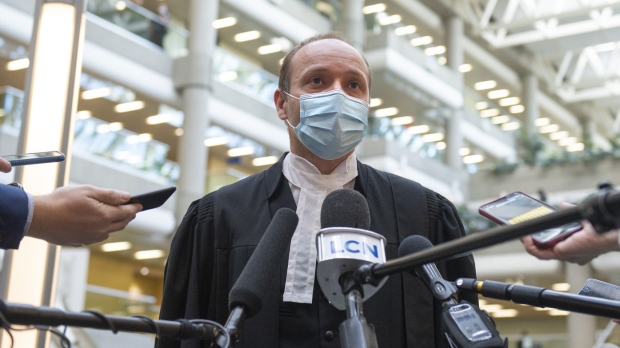 QUEBEC – The suspect in Quebec’s murderous Halloween night sword attack was unable to get immediate psychiatric help after he had professed disturbing and delusional views six years before the stabbing rampage, a trial heard Tuesday.

Carl Girouard, 26, is charged with two counts of first-degree murder in the killings of Suzanne Clermont, 61, and Francois Duchesne, 56, in the historic Old Quebec district on Oct. 31, 2020. He is also charged with five counts of attempted murder for allegedly injuring five other people with a sword that night.

Social worker Charles-Andre Bourdua told jurors on Tuesday he met Girouard nine times between December 2014 and September 2015. He said the suspect had been referred to him by a psychologist at an adult training centre who noticed homicidal and suicidal ideas in Girouard’s writings in late 2014.

Bourdua said Girouard told him about wanting to randomly kill people with a sword. One of their meetings – in March 2015 – took place at the suspect’s residence, where Bourdua noted the presence of a sword. Girouard told him the sword wasn’t the weapon he intended to use to murder, Bourdua told the court.

The accused, Bourdua said, was polite and collaborative but had certain fixations and obsessions.

Bourdua told the court he continued to see Girouard beyond the usual three-month assessment to ensure he would be taken in by a psychiatrist.

Defence lawyer Pierre Gagnon asked Bourdua why the suspect had not met with a doctor by September 2015.

Bourdua replied that there were institutional delays, adding that more information on the suspect was needed before a psychiatrist could take charge of him. The social worker told the court he was assured the necessary steps had been taken in Girouard’s case.

Quebec City police Const. Vincent Giguere told the jury he identified the suspect using a licence plate reader installed inside a traffic light, adding that he reviewed hours of surveillance video to retrace the route allegedly taken by Girouard.

Jurors viewed the footage, which shows Girouard moving quickly on foot through Old Quebec dressed in black and carrying a sabre. Some portions of the video were placed under publication ban.

According to the Crown’s case, Girouard allegedly left home in his car, taking a Japanese-style sword called a katana that had a 76.9-centimetre blade. He wore black jogging pants, black leather boots, a kimono and a black mask. After arriving in Quebec City, he allegedly drove around before finally parking in front of the Chateau Frontenac hotel in the city’s historic quarter.

Girouard has admitted to stabbing people on Oct. 31, 2020, but the judge has told jurors the suspect will argue he was not criminally responsible at the time of the events because he was suffering from a mental disorder.

The prosecution has argued that the suspect had previously stated he wanted to kill people with a sword as early as 2014.

The proceedings on Tuesday ended with 11 jurors after one was dismissed for testing positive for COVID-19. According to the Criminal Code, a minimum of 10 jurors is required to render a verdict.

The trial is scheduled to continue Wednesday and is expected to last between four and five weeks.

— by Sidhartha Banerjee in Montreal

This report by The Canadian Press was first published April 12, 2022.