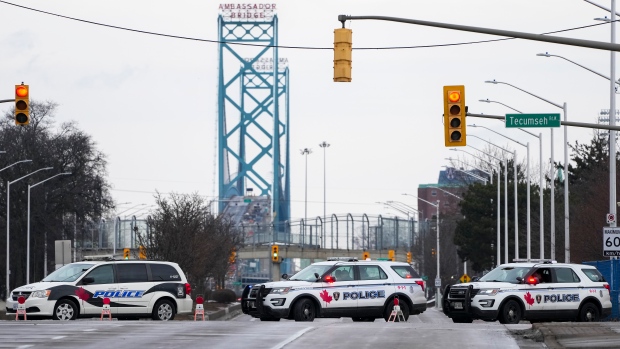 A protest against COVID-19 measures is preventing Canada-bound traffic from crossing the Ambassador Bridge for yet another day.

Police say those using the border bridge to cross into the United States can expect significant delays and are telling all motorists to avoid access points to the span due to the ongoing demonstration.

The protest on the Canadian side of the bridge that links Windsor, Ont., and Detroit began on Monday.

Protesters are being advised not to endanger members of the public or engage in illegal activities after a man was arrested Wednesday for driving in an unsafe manner.

Prime Minister Justin Trudeau says he and Ontario Premier Doug Ford are working to get the situation in Windsor and Ottawa, where a similar demonstration has dragged on for nearly two weeks, under control.

Automaker Ford of Canada is running its plants in Oakville, Ont., and Windsor at reduced capacity today, saying the disruption at the bridge could have widespread impact on automakers on both sides of the border.