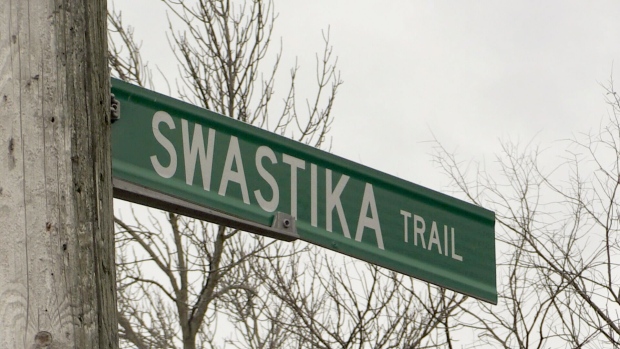 Randy Guzar remembers being shocked when he saw the name of the street his then-girlfriend lived on two decades ago.

The private road in Puslinch Township in southern Ontario was called Swastika Trail, prompting Guzar to wonder why it hadn’t been changed.

“I remember vividly thinking, ‘Oh my goodness, you have to be kidding me,”’ he said. “I found that shocking and I found it disturbing.”

Guzar, who later became a resident of that street after marrying his girlfriend and moving into her home, said years of pushing for the name to be changed finally paid off when the township voted Wednesday to rename it.

“This is really a win for all Canadians,” Guzar said Thursday. “We had a strong feeling of accomplishment and contribution to our community that will be everlasting.”

Swastika Trail, near Puslinch Lake, was named in the 1920s. The township received several complaints regarding the name over the years, with some, including Guzar, arguing the swastika is a symbol that had represented hatred, white supremacy and antisemitism since the Second World War.

A vote this week to rename the street passed 4-1.

Coun. John Sepulis, who was in favour of the name change, said he was glad the “offensive” name would be removed from the street.

“I felt it was a long time coming,” he said Thursday.

Sepulis said he first proposed a motion to change the street’s name in 2017 but it was rejected unanimously.

Five years later, however, the township’s political landscape had changed – three new councillors had been elected.

Another factor at play was a policy approved by the council in July that allowed residents to propose new names for streets.

Guzar said the new policy spurred the latest effort to have the street’s name changed.

The Friends Of Simon Wiesenthal Center For Holocaust Studies, a non-profit organization that advocated to rename the street, welcomed the decision made by the township.

“Nearly five years after voting against renaming Swastika Trail, Puslinch council has made the right decision to change the street name that has for decades left a stain on the township,” Jaime Kirzner-Roberts, the organization’s director of policy, wrote in statement.

“We commend the local residents who never gave up on their fight to change the street name and are thankful township staff had come to the realization that the street name is inappropriate and a name change is long overdue.”

Township Mayor James Seeley, who was the only one voted against the name change, said he supports the outcome of the vote.

The street is being renamed Holly Trail.