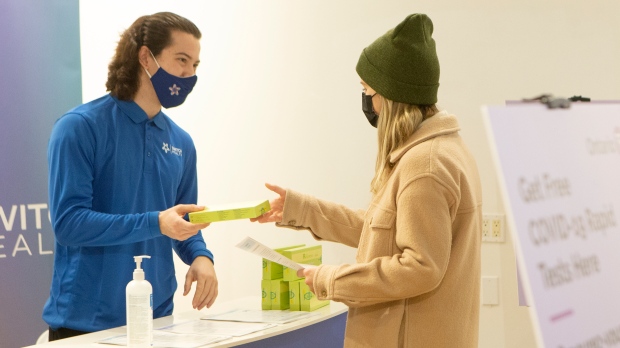 Provincial health officials reported 41 more virus-related deaths that occurred in the past month and less than 1,100 patients hospitalized with COVID-19 on Thursday.

The Ministry of Health says three of the deaths happened on Feb. 22, six deaths on Feb. 21 and the other deaths occured in the previous days.

Six of the reported deaths are long-term care home residents.

There are currently 1,066 patients hospitalized with the virus in Ontario, down from 1,106 yesterday and 1,342 a week ago.

Of those hospitalized, 302 people are in intensive care, compared to 356 a week ago.

Infectious diseases specialist at Toronto General Hospital Dr. Isaac Bogoch says Ontario’s health-care system is in a much better position overall compared to a month ago.

“If you look at how we’re doing today and yesterday and the day before versus one week, two weeks, three weeks, four weeks ago, we’re in a much, much, much better place. I mean, we had north of 4,000 people in hospitals with COVID-related illnesses in Ontario, and now we’re hovering around 1,000,” he told CP24 on Thursday.

Ontario labs processed more than 21,400 tests in the past 24 hours, producing a positivity rate of 9.7 per cent, compared to 11 per cent a week ago, the ministry says.

The province reported 2,404 lab-confirmed cases today, but health officials say the case count is an underestimate due to testing restrictions.

Among the latest cases, 1,841 of the individuals are fully vaccinated, 298 are unvaccinated, 80 are partially vaccinated and 185 have an unknown vaccination status.

The numbers used in this story are found in the Ontario Ministry of Health’s COVID-19 Daily Epidemiologic Summary. The number of cases for any city or region may differ slightly from what is reported by the province, because local units report figures at different times.