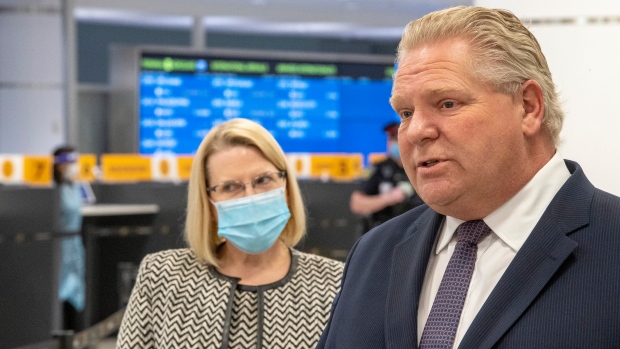 CTV News Toronto and CP24 have reached out to the minister for an interview on multiple occasions since she was sworn in, but on each attempt, the request has been declined.

The most recent request was sent on Tuesday morning.

In a statement issued last week, a spokesperson for Jones acknowledged that Ontario’s health system is facing pressures due to the challenge of maintaining the required staffing levels.

The Ontario Nurses’ Association says its members have reported that about 25 hospitals were forced to make changes over the long weekend due to staff shortages across the province.

“Either [they] had to reduce capacity in their emergency departments, O-Rs, beds, labour and delivery patients that had to be re-directed to other hospitals. It is absolutely outrageous,” Ontario Nurses’ Association President Cathryn Hoy said on Tuesday.

Meanwhile, Dr. Adil Shamji, an emergency doctor and Liberal MPP for Don Valley East, says that 13 different emergency departments in the province have been forced to close. “And that is just the tip of the iceberg,” he said.

This follows news that an entire intensive care unit at a hospital in Bowmanville was temporarily shut down ahead of the long weekend.

Shamjo said he has resorted to sending Jones a letter after multiple emails have gone unanswered.

Fraser insisted there are measures available that the province “should have been taken by now,” including repealing Bill 124, which caps a nurse’s salary increase at one per cent.

He also urged the province to add more mental health supports, 10 paid sick days for all Ontario workers and accelerating the credentials of the tens of thousands of nurses who are sitting on the sidelines because they are educated outside of the country.

“Plug the hole in the boat,” Fraser said.