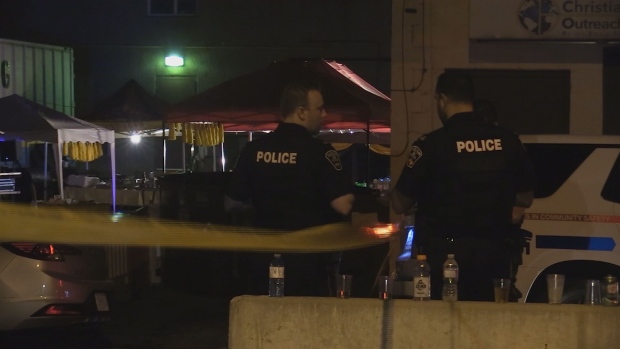 Police in Durham say they’re searching for a male suspect who is wanted in connection with a shooting in Ajax that sent three men and three women to hospital.

Previously, investigators had not provided any details about the alleged shooter.

They would only say that this individual fled the scene in a dark-coloured, four-door vehicle.

At said the scene, police said they found five people who had been shot at the scene.

A sixth person, who had also been shot, showed up a Toronto hospital, they said.

Police said four of the victims sustained non-life threatening injuries, while the two remaining were critically hurt. All of the victims are now listed in stable condition, they said.

Investigators also said they believe the suspect attended the “customer appreciation party” that was being held at the back of the local Caribbean market.

They said he was “involved in a verbal altercation with some patrons” and had left the restaurant, but returned hours later and opened fire.

“(We) interviewed several patrons of this after-hours party and continue to look for witnesses and evidence that would assist in identifying the suspect(s),” they said.

Anyone with further information about this incident should contact Det. MacKinnon of DRPS’ West Criminal Investigations Bureau at 1-888-579-1520, ext. 2529, or Crime Stoppers at 1-800-222-8477 (TIPS) or www.durhamregionalcrimestoppers.ca.