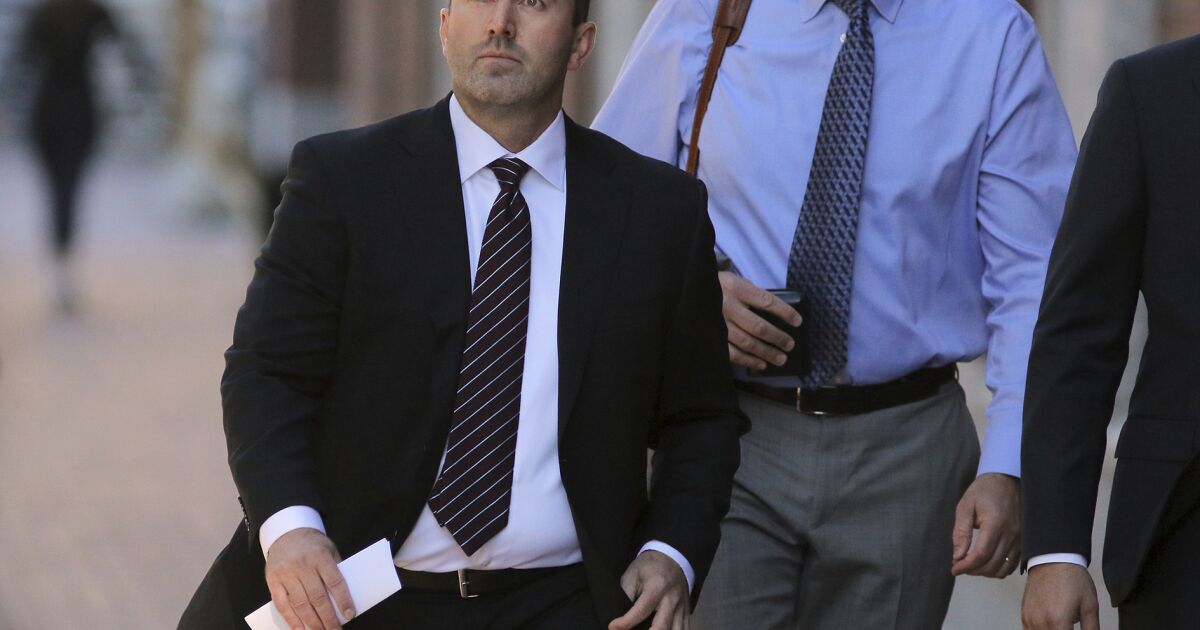 A former EBay Inc. executive was sentenced on Thursday to almost five years in prison for leading a scheme to terrorize the creators of an online newsletter that included sending live spiders, cockroaches, a funeral wreath and other disturbing deliveries to their home.

David Steiner, who along with his wife was the target of the harassment campaign, told the court that James Baugh, EBay’s former senior director of safety and security, and other EBay employees made their lives “a living hell.” He expressed fear that other companies would use it as a blueprint to go after journalists in the future.

“This was a bizarre, premeditated assault on our lives … with buy-in at the highest levels of EBay,” Steiner told the judge.

Another former EBay executive, David Harville, was sentenced later Thursday to two years behind bars for his role in the scheme targeting David and Ina Steiner, the publisher and reporter who angered executives with coverage of the San Jose-based company in their newsletter, eCommerceBytes.

Baugh and Harville, EBay’s onetime director of global resiliency, are among seven former employees who have pleaded guilty to charges in the case.

Court records in the case show how the top EBay executives became enraged by the Steiners’ newsletter and readers who posted comments criticizing the company on their site, which EBay viewed as a threat to its business.

The scheme was hatched in August 2019 after Ina Steiner wrote a story about a lawsuit brought by EBay accusing Amazon of poaching its sellers.

A half-hour after the article was published, then-Chief Executive Devin Wenig sent another top EBay executive a message saying: “If you are ever going to take her down … now is the time,” according to court documents. That executive sent Wenig’s message to Baugh and called Ina Steiner a “biased troll who needs to get BURNED DOWN.”

Soon, Ina Steiner began receiving harassing and sometimes threatening Twitter messages. Bizarre anonymous packages started arriving at the couple’s home, including a box of live spiders, a funeral wreath and a book about surviving the loss of a spouse. Ina Steiner began receiving dozens of strange emails from organizations such as an irritable bowel syndrome patient support group and the Communist Party of the United States, authorities say.

Authorities portrayed Baugh as the mastermind of the scheme and said he directed EBay employees to use prepaid debit cards, disguises and overseas email accounts to hide the company’s involvement.

Baugh then recruited Harville to go with him to Boston to spy on the couple, authorities say. Baugh, Harville and another EBay employee went to the couple’s home in the hopes of installing a GPS tracker on their car, but the garage was locked, so Harville bought tools with a plan to break into it, prosecutors say.

Harville’s attorneys said he had no involvement in or knowledge about the threatening messages or deliveries sent by his colleagues.

Prosecutors said in court documents that although Harville wasn’t at the initial meetings about the scheme, “he was aware enough of the harassment by the time he was in Boston to joke with Baugh about delivering a bag of human feces, a running chain saw, and a rat” to their porch.

Baugh’s lawyers said their client had faced “intense, relentless pressure” from executives — including Wenig — to do something about the Steiners. They described Baugh as a “tool” who was used by EBay and then discarded when “an army of outside lawyers descended to conduct an ‘internal investigation’ aimed at saving the company and its top executives from prosecution.”

Wenig, who stepped down as chief executive in 2019, was not criminally charged in the case but faces a civil lawsuit from the couple. He has denied any knowledge of the harassment campaign.

“At this point, an independent investigation has said that Mr. Wenig had no knowledge and the prosecutors in the case have made it clear that Baugh was responsible. Devin never told anyone to do anything unethical or illegal and if he had known about it, he would have stopped it,” a spokesperson for Wenig said in an email.

Assistant U.S. Atty. Seth Kosto accused Baugh of trying to deflect blame, saying that no one above him at EBay “told him to anonymously threaten and harass and stalk the Steiners.”

The Steiners say the terror campaign stole their sense of safety and caused devastating consequences to their business and finances.

“What EBay — the defendant and other co-conspirators, both indicted and unindicted — did to us has changed me forever and I don’t think the old David is coming back,” David Steiner said.

Both Baugh and Harville apologized to the Steiners for their actions before their sentences were handed down. Baugh told the Steiners he hopes that they will forgive him some day.

“I take 100% responsibility for this, and there is no excuse for what I have done,” Baugh said. “The bottom line is simply this: If I had done the right thing and been strong enough to make the right choice, we wouldn’t be here today, and for that I am truly sorry.”