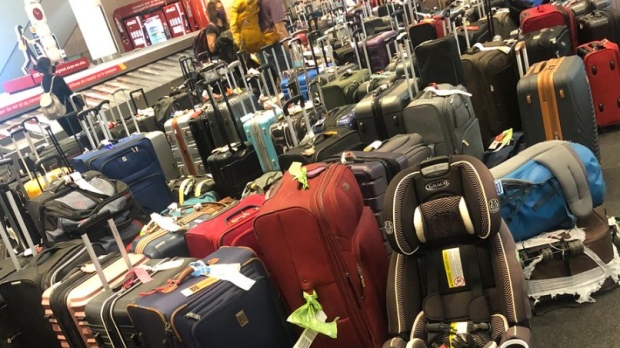 What was supposed to be a fun weekend trip with friends to Arizona has turned into a nightmarish five-day, “suitcase scavenger hunt” for Toronto resident Jehaanara Kurji.

Last Friday, Kurji boarded a flight at Pearson airport to Phoenix to attend a bachelorette party. However, when she arrived there, her checked bag was no where to be found.

Kurji, who moved to Toronto from Kenya a month ago, tried to make the best of the situation. She said the airline offered to her some compendation to buy things she needed that were inside the lost luggage.

She said the carrier, Air Canada, never contacted her about her missing luggage.

“On Sunday night, I returned to the airport to go home and that’s when I found out my suitcase had arrived in Arizona on Saturday,” she told CP24.

That bag was loaded onto the plane back to Toronto, but somehow went MIA for a second time due to a “baggage handler issue” and remains lost.

“I wish I had not even carried that piece of luggage,” said Kurji, who sifted through massive piles of suitcases in Pearson’s baggage claim area for more than an hour Sundsy night, but never found her bag.

Kurji, who headed back to the Mississauga airport Tuesday afternoon in the hope of resuming her search, said she then joined the lost luggage line, but was ultimately told to go home and submit a claim online.

“I have no idea what happened to my bag. I tried calling Air Canada several times but due to high call volumes I can’t even wait on hold,” she said.

“Right now I don’t even know how I’m going to get it back.”

#Pearson airport today. Some suitcases have been here for 6 days. I lost luggage to my destination and on the way back. At 2am they just sent us all home and told us to send an email. #aircanada pic.twitter.com/26TILoGYE6

In a statement provided to CP24, Air Canada said they “make every effort to ensure (bags arrive with their owners) and, while in the vast majority of cases we succeed, we continue to work very hard both internally and in cooperation with our partners to further improve the system.”

The airline said suitcases sometimes do not arrive at their destination for many reasons, “a lot of them outside the airlines’ control.”

“But be assured that avoiding baggage delays is a top priority for us. We know very well delays are disruptive and inconvenient for our customers. Bear in mind too that each delayed bag is costly for us to handle and deliver post-flight, so we are doubly incentivized to have bags arrive with the customers,” Air Canada said.

The carrier went on to went on to say with the resumption of travel, there are simply more instances of delayed bags. They said currently 120,000 or more people a day fly with Air Canada, compared to just 23,000 a year ago.

“More impactfully, the operating environment globally has changed from what it was prior to the pandemic, notably the well-documented issues such as security and customs lines, aircraft being held at gates unable to unload passengers at airports, and limitations on the number of flights by air traffic control that force airlines to make last minute cancellations,” said Air Canada, which recently announced steps to improve “the customer journey, including baggage handling.”

“All these and other events, such as a severe storm, can interrupt our schedule and the flow of not only passengers but also their baggage, which moves in a parallel, but more complicated flow than customers.”

Greater Toronto Airports Authority, which operates Pearson International Airport, said a “number of issues over the past several days” have led to “challenges with baggage.”

“This includes flight delays and cancellations, staff shortages with our airline partners and temporary mechanical disruptions with the baggage system,” The GTAA said in a statement provided to CP24.

“We have worked with the airlines to ensure unclaimed bags are removed from the carousels and staged in the baggage hall to make room for bags from other flights.”

The operator said while they handle baggage infrastructure and system maintenance, it’s ultimately the responsibility of airlines to reunite passengers with their luggage.

CP24 has requested specific comment from the airline about Kurji’s lost luggage situation, but we have yet to hear back.

Kurji is not alone as dozens of travellers have recently taken to social media to share stories and photos about the massive piles of luggage in Pearson’s baggage claim areas.

If anyone is missing your luggage it might be at Pearson. What a shit show!!! #aircanada pic.twitter.com/rLrW5GOIlI

So much luggage but where’s all the people? Pearson Airport gong show! pic.twitter.com/AiHpPB5c0w

Brutal line-ups at Toronto Pearson airport – atleast 3 hours thru baggage check-in and customs- It could be better organized for sure !!!

After customs – #Pearson baggage claim a little backed up. pic.twitter.com/9H7Y69myGI

Baggage claim at Pearson Airport in Toronto. Pretty much all @AirCanada flights to the US canceled for the last three days. Let’s try to find our bag. pic.twitter.com/dWLzflXhCb