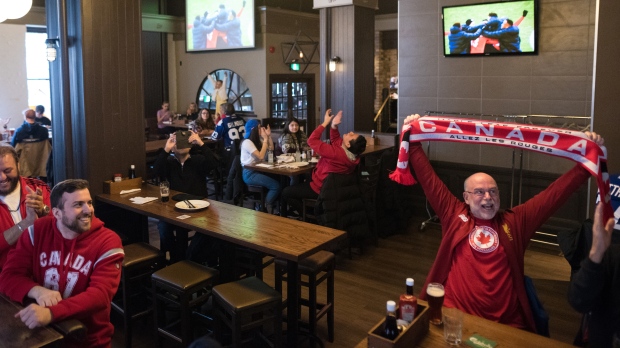 Canadian soccer fans from far and wide are likely feeling the pre-game jitters and excitement as the men’s team gears up to play its first match at the FIFA World Cup in Qatar.

The last time Canada played in the World Cup was also the team’s first time, 36 years ago when Mexico hosted. Now the team is set to face Belgium, who was a semi-finalist in 2018.

Bars throughout the province can start serving liquor at 7 a.m., two hours earlier than usual for the duration of the tournament, due to the eight-hour time difference between Ontario and Qatar.

Here are some of the spots across the GTA where soccer fans can cheer Canada on during their World Cup matches.

The City of Toronto confirmed with CTV News Toronto it currently has no plans for any City-hosted outdoor viewing parties.

“We encourage residents and visitors to Toronto to plan to gather and patronize local restaurants and bars, many of which expect to be open, during World Cup matches and share in the excitement,” a spokesperson for the City said.

The Voyageurs, Canada’s nationwide soccer fanclub, shared the various bars across the country where they will cheer on the team, including the Duke of York on Prince Arthur Avenue, The Rec Room Roundhose on Bremner Boulevard, and Lost Craft Brewery on Runnymede Road, to name a few.

The Toronto Public Library’s Palmerston branch will air Canada’s first match, where fans can drop in without registering ahead of time.

There will also be a “massive” street party outside of Café Diplomatico Wednesday from 12 to 9 p.m. to cheer on Canada’s first match, and again on Dec. 18 for the final championship game with live entertainment starting at 9 a.m.

Celebration Square will be publicly screening various matches throughout the FIFA World Cup.

“We will be showing all of the Canada games on the Square, so get ready to cheer for Alphonso Davies, Stephen Eustaquio, Milan Borjan and the rest of the team!” the City said.

Soccer fans can check out the full screening online, and the only day the City won’t be screening matches is on Nov. 26 for the Light Up the Square event.

Brampton residents can head to Garden Square to watch all of Canada’s World Cup matches this year.

For Sunday’s match against Croatia, the square will have a soccer net for kids to play, and some local food vendors. There will also be life-sized cut-outs of Brampton players to snap some photos with.

So far, all of Canada’s confirmed FIFA games will be screened at Vaughan City Hall.

The city will provide updates on additional viewing parties as the team carries on through the tournament, but the final game will be aired on De. 18 – regardless of who is playing.

In partnership with the Town of Oakville, the Oakville Soccer Club will publicly screen Team Canada matches on its indoor soccer pitch.

If you’re coming to watch your games here, the soccer club asks you to bring your own lawn chair and blanket to put under the chair to preserve the turf.

Admission is free but once the soccer club reaches full capacity it will close its doors.

WHEN ARE CANADA’S GAMES?

With files from The Associated Press