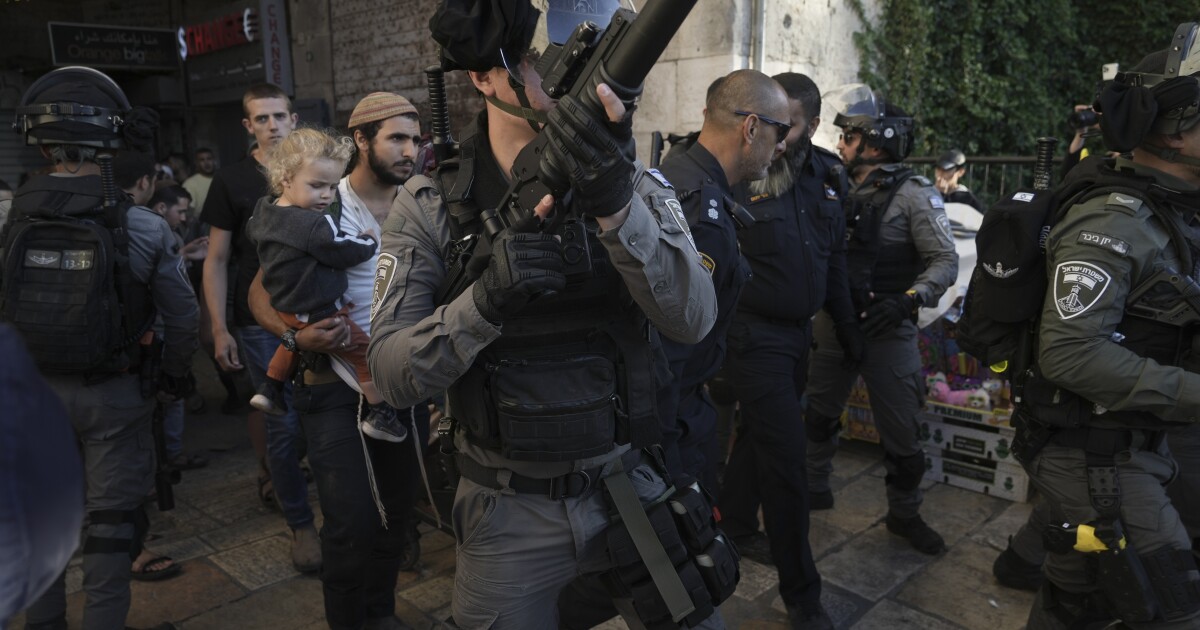 Israel’s air force and Palestinian militants traded fire across the Gaza frontier early Thursday as clashes erupted again at Jerusalem’s most sensitive holy site, worsening an escalation that has been eerily similar to the lead-up to last year’s Israel-Gaza war.

The violence along the Gaza front, fueled by the unrest between Israeli police and Palestinians in Jerusalem, appears to be the heaviest cross-border fighting since last year’s 11-day war and comes despite efforts to prevent a repeat. A rocket fired from Hamas-ruled Gaza this week shattered a months-long period of calm that followed the war.

Palestinian militants fired two rockets toward Israel from the Gaza Strip late Wednesday and early Thursday, and Israeli aircraft hit militant targets in the seaside enclave. One rocket landed in the southern Israeli city of Sderot, a frequent target, and another fell short and landed within Gaza, the Israeli military said. The launches set off air-raid sirens across parts of southern Israel, disrupting the quiet of the Passover holiday week.

Early Thursday, Israeli warplanes conducted airstrikes in the central Gaza Strip, local media reported. Social media posts by activists showed smoke billowing in the air. The Israeli military said the airstrikes were aimed at a militant site and the entrance of a tunnel leading to an underground complex holding chemicals to make rockets.

The military later said its planes attacked another Hamas compound after an anti-aircraft missile was fired from Gaza. It said the missile failed to hit its target, and no injuries or damage were reported.

The latest Israeli-Palestinian tensions boiled over after a series of deadly attacks by Palestinians against Israelis, which sparked days-long arrest raids by the military in a flashpoint West Bank city and spread into daily clashes in Jerusalem. This year, the Muslim holy month of Ramadan has coincided with Passover, a time of heightened religious observances and visits by large numbers of people to Jerusalem.

Israeli police said that dozens of masked protesters holed up in the Al Aqsa Mosque early Thursday, sealed the doors and began throwing rocks and firecrackers. Police said that they attempted to disperse the Palestinians using “riot dispersal means,” without elaborating, and that forces did not enter the mosque itself.

A Palestinian official from the Waqf, which administers the site, said large numbers of police used stun grenades to clear out the site. He said police also fired stun grenades and rubber-coated bullets against Palestinians who had sealed themselves inside the mosque. The official spoke on condition of anonymity because he was not authorized to discuss the incident with the media.

The Palestinian Red Crescent said 20 people were injured, one critically.

Similar clashes have taken place throughout the week, while fiercer ones broke out at the site earlier this month, wounding more than 150 Palestinians and three police officers.

Jordan, which administers the Al Aqsa Mosque, held an emergency meeting Thursday of a regional committee over what it called “illegal Israeli policies and measures” in Jerusalem.

A U.S. State Department delegation is also in the region in a bid to secure calm.

The scenes of rocket fire and repeated violence in Jerusalem recall the run-up to last year’s war. Last year, the violence also spread to mixed Jewish-Arab cities, which hasn’t happened in the current wave of unrest.

On Wednesday, hundreds of flag-waving Israeli ultra-nationalists marched toward predominantly Palestinian areas around Jerusalem’s Old City, a demonstration of Israeli control over the disputed city. Last year’s war erupted during a similar march, when Gaza militants, declaring themselves the guardians of Jerusalem, fired a barrage of rockets toward the holy city.

Those events, along with other developments, led to an 11-day war between Israel and Hamas that killed more than 250 Palestinians and 14 people in Israel, causing extensive damage in Gaza.

This year, Israeli police closed the main road leading to the Old City’s Damascus Gate and the heart of its Muslim Quarter. After some pushing and shoving with police, the ultra-nationalist marchers rallied near the barricades, waving flags, singing and chanting.

Israeli nationalists stage such marches to try to assert sovereignty over East Jerusalem, which Israel seized in 1967, along with the West Bank and Gaza, and annexed in a move not recognized internationally. The Palestinians seek an independent state in all three territories and consider East Jerusalem their capital.

The hilltop shrine in the Old City is the emotional ground zero of the Israeli-Palestinian conflict and the center of previous rounds of violence. Known to Muslims as the Al Aqsa Mosque compound, it is the third-holiest site in Islam. It is also the holiest site in Judaism, revered by Jews as the Temple Mount, the site of their biblical temples.

Israel says it is maintaining a decades-old status quo at the site, which prevents Jews from praying there. But during the Passover holiday this year, visits by Jews have skyrocketed, and in some cases Jews have been praying at the compound. Palestinians view the visits, under police escort, as a provocation and possible prelude to Israel taking over the site or partitioning it.

For Palestinians, the mosque compound, administered by Muslim clerics, is also a rare place in Israeli-annexed East Jerusalem where they have a measure of control.

Palestinian militant groups in Gaza — the ruling Hamas organization and the smaller Islamic Jihad — have positioned themselves as defenders of the holy site. On Wednesday, Hamas said Israel would bear “full responsibility for the repercussions” if it allowed the marchers “to approach our holy sites.”