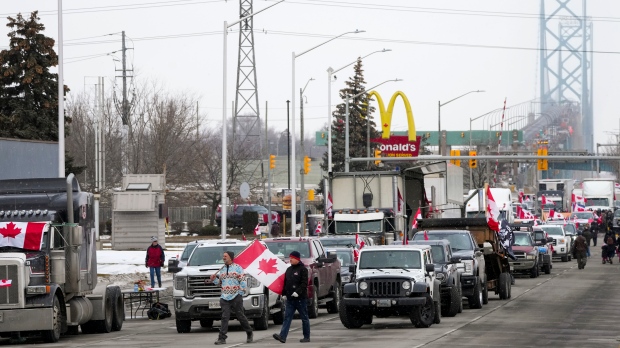 Ontario Premier Doug Ford is making an announcement Friday morning as sources say the government is considering invoking emergency measures in an attempt to end trucker convoy protests, including one at a vital border crossing in Windsor.

Sources told CTV News yesterday the measures, along with a possible state of emergency, could come into effect today.

The measures would allow law enforcement to issue tougher fines and penalties against demonstrators across the province who are currently protesting COVID-19 vaccine mandates and other public health restrictions.

Ford is expected to discuss the measures in his announcement today and will be joined by Solicitor General Sylvia Jones, Attorney General Doug Downey and Caroline Mulroney, minister of transportation.

A protest at the Ambassador Bridge in Windsor, which borders with Detroit, started on Monday and has caused traffic and trade disruptions.

Crowds of semi-trailer trucks and pickup trucks have been stationed at the Windsor end of the border crossing, closing off both directions of a street that connects with the bridge.

The bridge is one of North America’s busiest international commercial border crossings.

Earlier this week, Ford said that the ongoing “illegal occupation” and blockade has to stop.

“The damage this is causing to our economy, to people’s jobs and their livelihoods is totally unacceptable. We cannot let this continue,” the premier said in a statement on Wednesday.

Meanwhile, an Ontario Superior Court justice is set to hear an application today for an injunction that would prevent protesters from blocking the bridge.

The Automotive Parts Manufacturers’ Association applied for the injunction, and the City of Windsor was granted intervenor status.

The bridge blockade is one of several demonstrations happening in the province and country over COVID-19 restrictions.