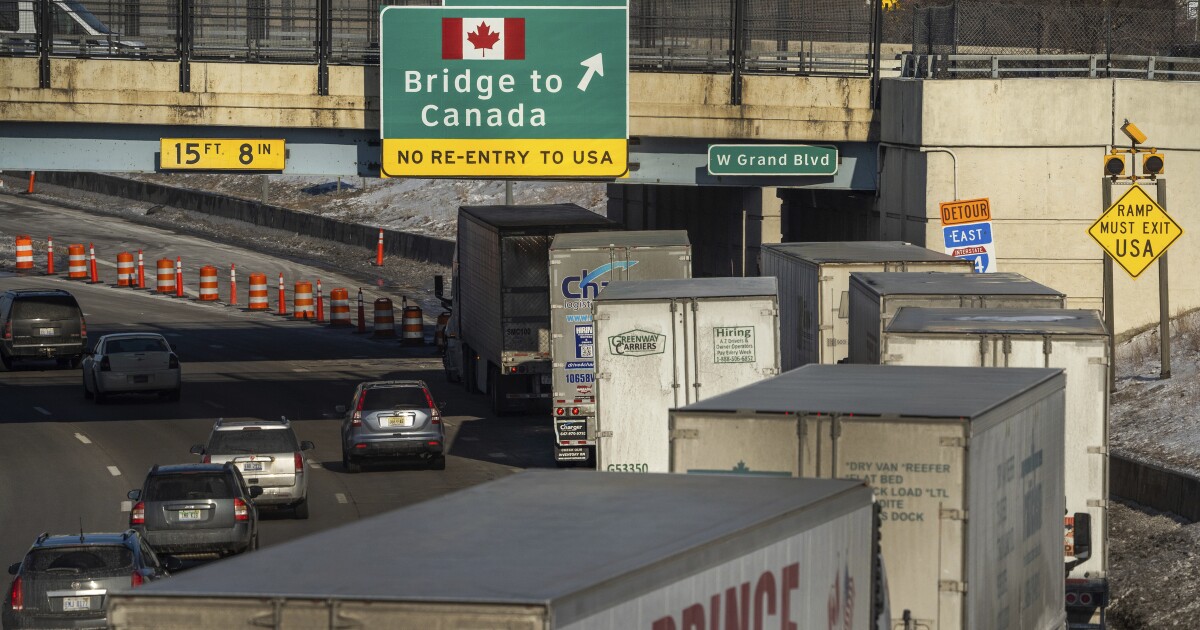 A blockade of the bridge between Canada and Detroit by protesters demanding an end to Canada’s COVID restrictions forced the shutdown Wednesday of a Ford plant and began to have broader implications for the North American auto industry.

But Canadian Prime Minister Justin Trudeau stood firm against an easing of Canada’s coronavirus rules in the face of mounting pressure during recent weeks by demonstrations against them and against Trudeau himself.

The protest by people mostly in pickup trucks entered its third day Wednesday at the Ambassador Bridge between Detroit and Windsor, Ontario. Traffic was prevented from entering Canada, while U.S.-bound traffic was still moving.

The bridge carries 25% of all trade between the two countries, and Canadian authorities expressed increasing worry about the economic effects.

Ford said late Wednesday that parts shortages forced it to shut down its engine plant in Windsor and to run an assembly plant in Oakville, Ontario, on a reduced schedule.

“This interruption on the Detroit-Windsor bridge hurts customers, auto workers, suppliers, communities and companies on both sides of the border,” Ford said in a statement. “We hope this situation is resolved quickly because it could have widespread impact on all automakers in the U.S. and Canada.”

Shortages owing to the blockade also forced General Motors to cancel the second shift of the day at its midsize-SUV factory near Lansing, Mich. Spokesman Dan Flores said it was expected to restart Thursday, and no additional impact was expected for the time being.

Later Wednesday, Toyota spokesman Scott Vazin said the company would not be able to manufacture anything at three Canadian plants for the rest of this week because of parts shortages. A statement attributed the problem to supply-chain, weather and pandemic-related challenges, but the shutdowns came just days after the blockade began Monday.

“Our teams are working diligently to minimize the impact on production,” the company said, adding that it didn’t expect any layoffs at this time.

Stellantis, formerly Fiat Chrysler, reported normal operations, though the company had to cut shifts short the previous day at its Windsor minivan plant.

“We are watching this very closely,″ White House Press Secretary Jen Psaki said earlier of the bridge blockade. “The blockade poses a risk to supply chains for the auto industry because the bridge is a key conduit for motor vehicles, components and parts, and delays risk disrupting auto production.”

A growing number of Canadian provinces have moved to lift some of their coronavirus precautions as the Omicron surge levels off, but Trudeau defended the measures that the federal government is responsible for, including the one that has angered many truck drivers: a rule that took effect Jan. 15 requiring truckers entering Canada to be fully vaccinated against COVID-19.

“The reality is that vaccine mandates, and the fact that Canadians stepped up to get vaccinated to almost 90%, ensured that this pandemic didn’t hit as hard here in Canada as elsewhere in the world,” Trudeau said in Parliament.

About 90% of truckers in Canada are vaccinated, and trucker associations and many big-rig operators have denounced the protests. The U.S. has the same vaccination rule for truckers entering the country, so it would make little difference if Trudeau lifted the restriction.

Protesters have also been blocking the border crossing at Coutts, Alberta, for a week and a half, with about 50 trucks remaining there Wednesday. And more than 400 trucks have paralyzed downtown Ottawa, Canada’s capital, in a protest that began late last month.

While protesters have been calling for Trudeau’s removal, most of the restrictive measures around the country have been put in place by provincial governments. Those include requirements that people vaccination “passports” to enter restaurants, gyms, movie theaters and sporting events.

Alberta, Saskatchewan, Quebec, Prince Edward Island and Nova Scotia announced plans this week to roll back some or all of their precautions. Alberta, Canada’s most conservative province, dropped its vaccine passport immediately and plans to get rid of mask requirements at the end of the month.

Despite Alberta’s plans to scrap its measures, the protest there continued.

“We’ve got guys here — they’ve lost everything due to these mandates, and they’re not giving up, and they’re willing to stand their ground and keep going until this is done,” said protester John Vanreeuwyk, a feedlot operator from Coaldale, Alberta.

As for the Ambassador Bridge blockade, Windsor Mayor Drew Dilkens said police had not removed people for fear of inflaming the situation. But he added: “We’re not going to let this happen for a prolonged period of time.”

The demonstration involved 50 to 74 vehicles and about 100 protesters, police said. Some of the protesters say they are willing to die for their cause, according to the mayor.

“I’ll be brutally honest: You are trying to have a rational conversation, and not everyone on the ground is a rational actor,” Dilkens said. “Police are doing what is right by taking a moderate approach, trying to sensibly work through this situation where everyone can walk away, nobody gets hurt, and the bridge can open.”

To avoid the blockade and get into Canada, truckers in the Detroit area had to drive 70 miles north to Port Huron, Mich., and cross the Blue Water Bridge, where there was a 4½-hour delay leaving the U.S.

At a news conference in Ottawa that excluded mainstream news organizations, Benjamin Dichter, one of the protest organizers, said: “I think the government and the media are drastically underestimating the resolve and patience of truckers.

“Drop the mandates. Drop the passports,” he said.

The “freedom truck convoy” has been promoted by Fox News personalities and attracted support from many U.S. Republicans, including former President Trump, who called Trudeau a “far left lunatic” who has “destroyed Canada with insane Covid mandates.”

Pandemic restrictions have been far stricter in Canada than in the U.S., but Canadians have largely supported them. Canada’s COVID-19 death rate is one-third that of the U.S.

Interim Conservative leader Candice Bergen said in Parliament that countries around the world were removing restrictions and noted that Canadian provinces were, too. She accused Trudeau of wanting to live in a “permanent pandemic.”

Ontario, Canada’s largest province, with almost 40% of the country’s population, is sticking to what it calls a “very cautious” stance toward the pandemic, and the deputy premier said it has no plans to drop vaccine passports or mask requirements.