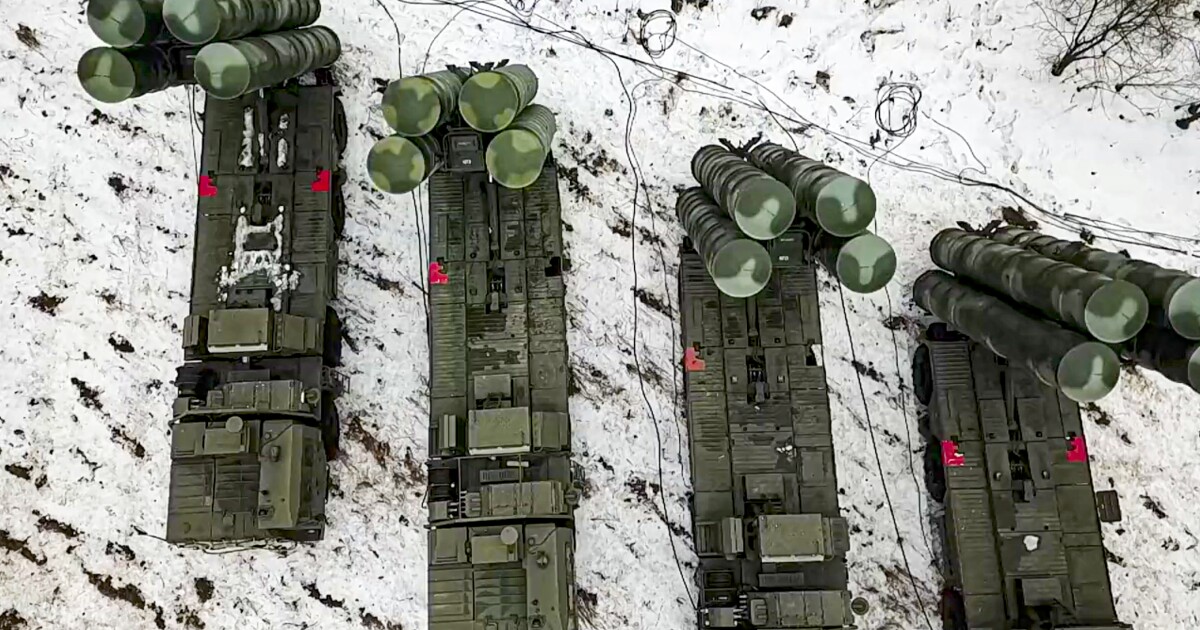 Britain’s top diplomat urged Russia on Thursday to defuse tensions over Ukraine and take the path of diplomacy even as thousands of Russian troops engaged in sweeping maneuvers in Belarus as part of a military buildup near Ukraine that has fueled Western fears of an invasion.

British Foreign Secretary Liz Truss again warned Russia that attacking its neighbor would “have massive consequences and carry severe costs,” and urged Moscow to de-escalate the tensions and abide by international agreements committing it to respecting Ukraine’s independence and sovereignty.

“Ideological approaches, ultimatums and moralizing is a road to nowhere,” Lavrov said, noting that his talks with Truss marked the first meeting of the two countries’ top diplomats in more than four years.

Russia has concentrated more than 100,000 troops near Ukraine’s border and has launched a series of military maneuvers in the region, but says it has no plans to invade its neighbor. It wants guarantees from the West that NATO won’t allow Ukraine and other former Soviet nations to join as members, that the alliance halt weapon deployments there and that it roll back its forces from Eastern Europe. The U.S. and NATO flatly reject these demands.

Moscow’s military buildup includes the deployment of troops on the territory of Russian ally Belarus for sweeping joint drills, which entered their decisive phase Thursday. The Ukrainian capital, Kyiv, is just about 50 miles south of the border with Belarus, and the West fears that Russia could use Belarusian territory to invade Ukraine.

Russia and Ukraine have been locked in a bitter conflict since 2014, when Ukraine’s Kremlin-friendly president was driven from office by protests, following which Moscow annexed Ukraine’s Crimean peninsula and then backed a separatist insurgency in the east of the country. The fighting between Russia-backed rebels and Ukrainian forces has killed over 14,000 people.

A 2015 peace deal brokered by France and Germany helped end full-scale hostilities, but frequent skirmishes have continued along the tense line of contact, and efforts to negotiate a political settlement have stalled. The Kremlin has accused Kyiv of sabotaging the peace agreement; Ukrainian officials in recent weeks have said that implementing it would hurt Ukraine.

Foreign policy advisors from Germany, France, Russia and Ukraine, who met in Paris on Jan. 26 without scoring any visible progress, are scheduled to have another round of talks in Berlin on Thursday to try to reach a common interpretation of the 2015 peace deal and plan further steps.

The talks in Berlin come are part of renewed diplomatic efforts, which included French President Emmanuel Macron visiting Moscow for more than five hours of talks Monday with President Vladimir Putin in Moscow before meeting with Ukrainian President Volodymyr Zelensky in Kyiv the following day.

Macron said Putin told him he wouldn’t initiate an escalation, but the French leader also acknowledged that it would take time to find a diplomatic solution to the biggest security crisis between Russia and the West since the Cold War.

German Chancellor Olaf Scholz is to follow suit with visits to Kyiv and Moscow next week. He met Monday with Biden, who vowed that the Nord Stream 2 Russia-to-Germany gas pipeline would be blocked in the event of an invasion. Such a move against the pipeline, which has been completed but isn’t yet operating, would hurt Russia economically but also cause energy-supply problems for Germany.

NATO also has stepped up the deployment of troops to bolster security along the alliance’s eastern flank.

The U.S. has begun to move the 2nd Cavalry Regiment’s Stryker squadron from Vilseck, Germany, to Romania, which borders Ukraine. U.S. officials have said they would send about 1,000 NATO troops.

About 1,700 U.S. soldiers from the 82nd Airborne Division are going to Poland and about half have now arrived, with more expected to flow in during the coming days, Pentagon spokesman John Kirby said. Britain also has pledged to send 350 more troops to Poland and already has sent anti-tank weapons to Ukraine.

British Prime Minister Boris Johnson is set to hold talks with NATO Secretary-General Jens Stoltenberg in Brussels before heading to Poland on a visit that includes meeting British troops deployed to the country.

Johnson’s office said that he would “stress to allies that they must not compromise on NATO’s fundamental principles. This includes inviolability of countries’ sovereignty, the right of every European democracy to aspire to NATO membership and NATO’s obligation to protect the security of its member states.”