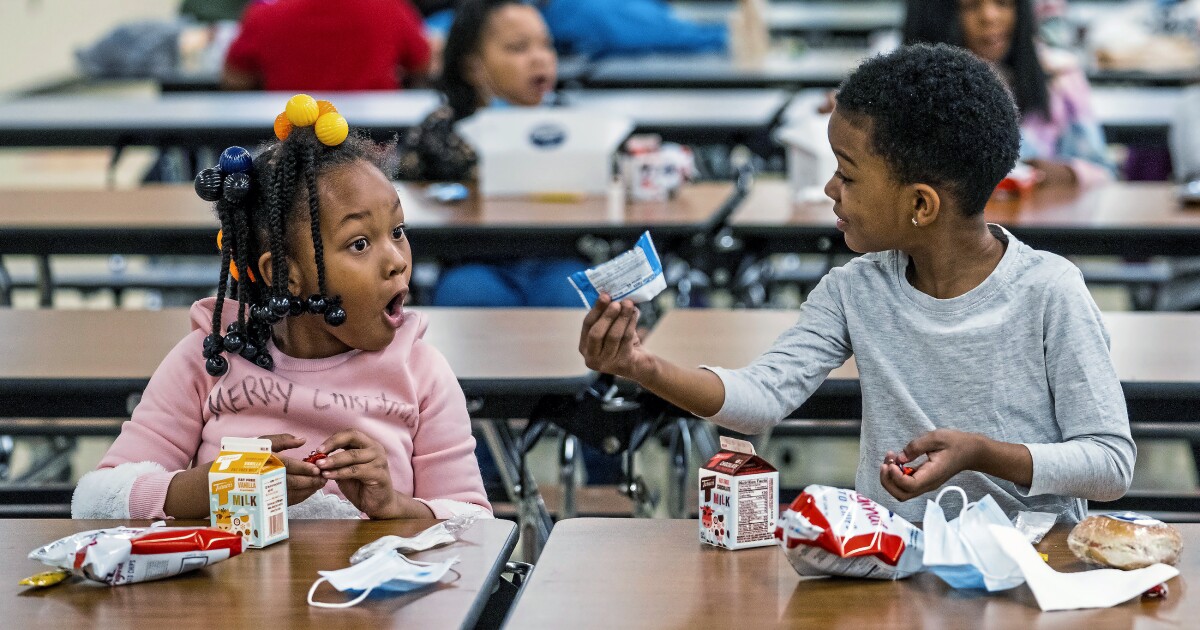 The Biden administration issued transitional standards for school lunches Friday that are meant to ease the path for cafeterias to get back on a more healthful course as they recover from pandemic and supply chain disruptions.

Schools have struggled to meet the government’s nutrition benchmarks through the pandemic but have not been punished for falling short. The “bridge” rule announced by the U.S. Department of Agriculture extends emergency flexibilities for the next two school years as schools gradually transition back to normal.

“We applaud schools’ heroic efforts throughout the challenges of this pandemic to continue serving kids the most nutritious meals possible,” Agriculture Secretary Tom Vilsack said.

“The standards we’re putting in place for the next two school years will help schools transition to a future that builds on the tremendous strides they’ve made improving school meal nutrition over the past decade,” he said.

The changes mean schools and child-care providers will be allowed to serve low-fat — not just nonfat — flavored milk, alongside low-fat regular milk. At least 80% of cereals, breads and rolls — instead of all of them — will have to be whole-grain rich.

The sodium allowed in school lunches will decrease by 10% beginning in 2023-24. That is a smaller reduction than previously planned but aligns with broader sodium reduction targets recently released by the U.S. Food and Drug Administration.

The USDA changed school nutrition standards in 2012 as part of then-First Lady Michelle Obama’s healthy eating initiative. Schools were told to do away with white bread and other refined grains over time while increasing fruits and vegetables, reducing sodium and setting calorie limits.

The Trump administration later rolled back the nutrition standards, but that move was thrown out by a federal judge in 2020. The judge said the administration did not give adequate public notice of the change.

The USDA oversees the national school lunch and breakfast programs, which serve millions of free and reduced-price meals daily.

Administrators say supply chain problems have made it hard to find foods that meet the standards, and coronavirus infections and exposures have depleted staff.

“School nutrition professionals are frantic just trying to get enough food on the tray for our students amid relentless supply chain disruptions and labor shortages,” association President Beth Wallace said in a statement praising the Agriculture Department action.

She said the group hoped to collaborate with the USDA “to assess the viability of nutrition standards moving forward.”

Vilsack said new long-term standards are planned for 2024-25 and beyond.

Rep. Bobby Scott, D-Va., who chairs the House Education and Labor Committee, said, “Throughout the pandemic, school meal programs have faced steep obstacles to serving students and families, from challenges to safely delivering food during school closures to securing the supplies and ingredients that school meal staff need.”

He called on Congress to build on support for child nutrition programs that were included in the administration’s American Rescue Plan.

“I am focused on securing the critical investments included in the House-passed Build Back Better Act and advancing a comprehensive reauthorization of federal child nutrition programs,” Scott said.