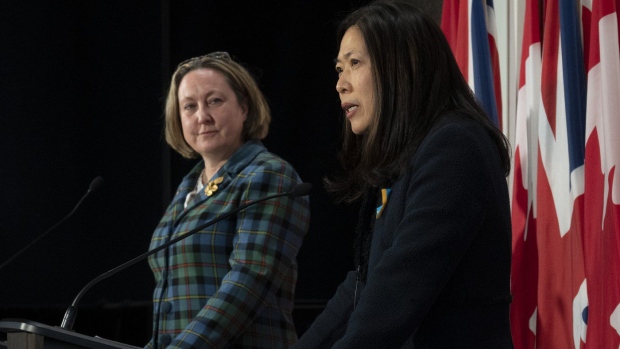 OTTAWA – A potential clash over hormone-treated Canadian beef is emerging as a sticking point as free trade talks between Canada and Britain formally begin.

In an interview with The Canadian Press, U.K. International Trade Secretary Anne-Marie Trevelyan confirmed her government would not compromise on allowing hormone-treated Canadian beef into Britain.

“In terms of hormone-treated meat, we have some very clear safety food standards in the U.K., which are ours, and we don’t compromise on those,” she said prior to joining her Canadian counterpart, Mary Ng, in Ottawa on Thursday to announce the formal launch of talks. Negotiators from both governments are to meet next week in London for the first round.

But Trevelyan said there is much room for the two parties to make other gains in agriculture, including sustainable food production. Both ministers also extolled the potential to make gains in digital trade, and expand investment flows.

Standing next to Trevelyan at Global Affairs Canada headquarters, Ng said the quality of Canadian beef and its producers are “second to none,” and she tried to sound an upbeat note, saying an eventual agreement would create new opportunities for Canadian and British exporters.

Britain and Canada have already negotiated an interim trade agreement to replace the broader Comprehensive Economic and Trade Agreement, or CETA, that Canada negotiated with the European Union.

Britain’s decision to leave the EU after its Brexit referendum meant that it was forced out of CETA at the end of 2020.

Britain and Canada reached an interim deal that preserved the main elements of CETA, including the elimination of tariffs on 98 per cent of Canadian exports to Britain.

Ng said in the interview that as the Russian invasion of Ukraine stokes unrest, a trade deal between Canada and Britain would help strengthen the resilience of global supply chains, as well as standing as an affirmation of the world trading order.

“It is important for not only the commercial relationship, which the free trade agreement will yield, but also for what we stand for.”

Britain is following Canada’s lead this week by revoking Russia’s most favoured nation trading status, which will lead to additional 35 per tariffs on key Russian goods.

This report by The Canadian Press was first published March 24, 2022.