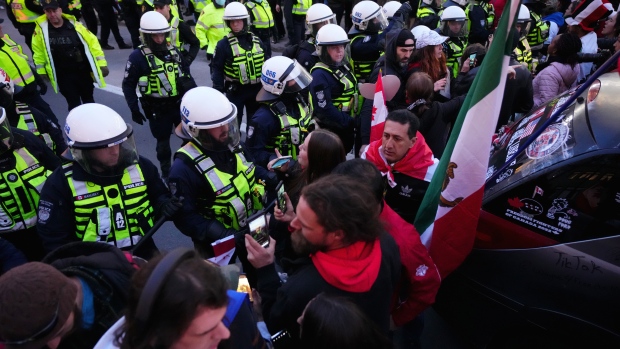 OTTAWA – Police in Ottawa made several arrests Friday after facing off against protesters opposed to COVID-19 mandates, wearing helmets and shields as big-rig trucks attempted to make their way to Parliament Hill.

Protesters arrived Friday afternoon as part of the “Rolling Thunder” rally, organized by Freedom Fighters Canada, a group dedicated to speaking out against COVID-19 mandates.

Many of the protesters were also part of the three-week “Freedom Convoy”demonstration that gridlocked Ottawa’s downtown earlier this year with big rigs, prompting the federal government to invoke the Emergencies Act for the first time. That protest ended after hundreds of police officers moved in to disperse the crowds, making dozens of arrests.

Before protesters arrived Friday, Ottawa police promised that protesters would not be allowed to get a foothold for a prolonged occupation this time.

They called in more than 800 reinforcements from the RCMP, Ontario Provincial Police and regional police services to guard every major downtown intersection and prevent protesters from bringing vehicles into the core.

It started calmly enough, with familiar shouts of “Freedom!” as protesters mingled and danced on Wellington Street, the main drive in front of Parliament Hill. Protesters also marched through the ByWard Market with a police escort.

But early Friday evening, police warned of a large convoy trying to make their way into the city. Soon,hundreds of protesters were crowded around large trucks and campers just outside the parliamentary precinct.

As night fell, protesters yelled “Hold the line,” trying to push police officers away from the vehicles. Police gradually attempted to push the crowds away from the trucks and back toward Parliament Hill as protesters called them “traitors.”

Some of the vehicles left on their own, as a tactical police armoured vehicle led a tow truck to the scene.

The “Rolling Thunder” group had not initially been clear about the cause they’re rallying for, except to say they would “peacefully celebrate our freedom,” and they oppose the removal of veterans from the National War Memorial during the “Freedom Convoy.”

However, many faces in the crowd belonged to protesters from the “Freedom Convoy” months earlier.

Angela Manella from North Bay, Ont., was in the national capital to protest the vaccine mandates in February. She said she’s returned because the mandates are still in place.

“My experience of the convoy protest was that there was so much love and connection and just such good energy,” Manella said Friday next to the Centennial Flame.

She said there was a sense of community among protesters at the convoy in February and that may be part of what is drawing them together again.

Others who gathered near the War Memorial said they are only in Ottawa this weekend to honour veterans who police removed from the site along with the rest of the protesters in February.

“It’s mostly like a parade to honour them for what they have done, they stood up for the right causes,” said a protester in a black leather vest who would only identify himself as Mario.

The rally Friday night is expected to be followed by a convoy of hundreds of motorcycles through downtown Saturday, with a stop at the War Memorial and another rally on Parliament Hill.

Vehicles won’t be allowed into a zone that includes the war monument and Parliament, police say, nor will they be allowed to stop along the route, but participants can walk through the area.

It’s also a chance for Ottawa’s police force to win back the trust and respect of the community, after coming under heavy criticism during the February protest for allowing it to go on so long before taking action.

For more than three weeks, protesters created encampments in downtown streets, which were packed with big rigs adorned with messages speaking out against vaccine mandates, COVID-19 restrictions and the prime minister.

“I think we’re going to have to wait and see. The Ottawa police lost a lot of trust last time. So this weekend is going to be a real test for them,” said Brian Latour, one of the organizers of a counter-protest in Ottawa.

Some nearby residents remember the last protest as a nightmare – one they don’t want to relive.

“A lot of them are concerned, some are scared and some are mad,” said Mary Huang, president of the Centretown Community Association, which represents the neighbourhood closest to Parliament Hill.

She said neighbours are still traumatized after the protest. The loud airhorns droning on at all hours of the night meant that many couldn’t sleep, and some people felt intimidated when they left their homes, she said.

They’re worried this weekend will be a repeat, before residents have even had a chance to recover, she said.

Ottawa police have promised they won’t allow another “illegal occupation” of the city, that there will be no tolerance for a long-term protest and any encampments will be dismantled.

By 4 p.m. Friday, city bylaw officers said they had issued 185 tickets and towed 20 vehicles related to the rally.

A statement on the “Rolling Thunder” website attributed to organizer Neil Sheard says the protesters plan to leave on Sunday, and they do not support “blockades, obstruction of police performing their duties, damage to property or hate and vitriol directed to the residents of Ottawa.”

The statement also encourages supporters to follow the laws, and says police will be held accountable in court for their actions during the event.

“Lastly, as seen during the lawful protest in Ottawa, spread as much peace, love and patriotism to your fellow Canadians as possible,” the statement says.

This report by The Canadian Press was first published April 29, 2022.